When Microsoft Office's Outlook was not yet part of the Office family and was a Windows client for Exchange Server, I was given a homework assignment to investigate the Exchange client. After that I changed my email client to Outlook.

One of the inconvenient things about writing a calendar in Outlook was that it was not possible to specify a lunar date. Birthdays are on the lunar calendar. At the time, maybe 1996 or 1997, I found the email address of the Outlook team at the time, and I sent an email to that team. In the East, lunar dates are used, so they asked for support to input schedules in the lunar calendar. It was then that I first learned that the lunar calendar is a lunar calendar. I got a reply, and they said they would add the feature in Office 97. However, Office 97 did not have a lunar function. The lunar date designation first appeared in the next version, Office XP.

Moving from Windows to Mac, I had a lot of trouble and made several attempts to change the calendar, contacts, tasks, notes, etc. of Outlook, which I used well, to Apple's software.

A lot of inconvenient things appeared as I gave up Mac's storage and moved Apple Mail, Apple Calendar, and Apple Address Book. It's me, because I use all the special features to fix Outlook so it can do what I do.

One of them is the lunar calendar. Using the Apple calendar, I couldn't figure out people's birthdays. By entering your birthday in the scheduling program, you don't have to circle the calendar in red at the beginning of each year. It is a small thing, but it is a benefit that can be obtained by using a certain program. In fact, I met a co-worker on the way to work today, and when I saw the birthday alarm on my phone, I said happy birthday. But I didn't know if it was the lunar calendar or the solar calendar, so I asked if it was true. This is because I am not sure if the schedule for my birthday is correct while using iCal. It was my brother-in-law's birthday on the weekend, and when I asked if it was right for my sister-in-law, she forgot.

I was thinking of sending an email to Apple asking for support for the lunar date, but I just gave up and lived.

However, by chance, our  Felaur I saw an Iranian blogger making a program that allows you to enter lunar dates. 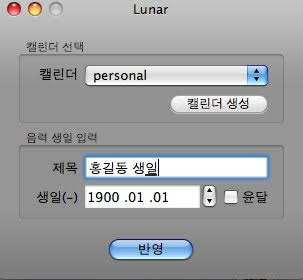 Felaur Go to , download the latest program, move it to the application folder, and run it. It seems to only work on Leopard.

I have separately received the lunar seasons and added ical , but now you can also enter the lunar birthday! It is not integrated into iCal and must be executed separately in the application folder. How much is this though!

I don't know if Apple is looking at the needs of these people.

I also use a lot of stuff made by people that Apple didn't provide. Here are just a few of the things I have posted on my blog.

A summary of Korean-English conversion from Mac to shift space

When will unsolved problems be resolved?

Problems with iMail and iCal in Leopard 10.5.2

made and published Felaur Thank you.