I use SK Broadband at home. Recently, there were times when the download speed was even 2Mbps, so I called customer service. After changing the person in charge, my house said that the speed was not constant.

I've been so frustrated lately Change your router to Wi-Fi 6th generation, changed the Internet carrier.

Both Seoul and Jeju houses have to use the internet, so it's burdensome to use gigabytes, so I'm just using them.

Even though it is 100 megabytes, Wi-Fi provides 2~18 megabytes during the day and 1-2 megabytes in the evening. next benchis measured with 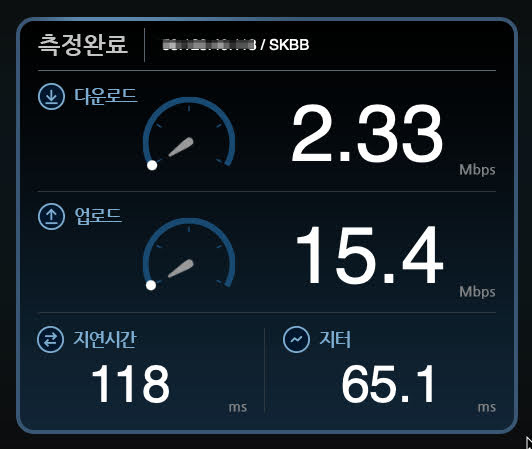 Before taking the router to Jeju Island, it was about 40 megabytes, so the speed is probably due to the router.

But when I called SK Broadband, they said that my house is no longer available.

The speed is to a certain extent by changing the router, but it seems to be a problem with the Internet coming into our house. Because it is asymmetrical, it is not an optical cable, and this is inevitably slower than an optical cable.

If the optical cable does not come in, the download and upload speeds are different. 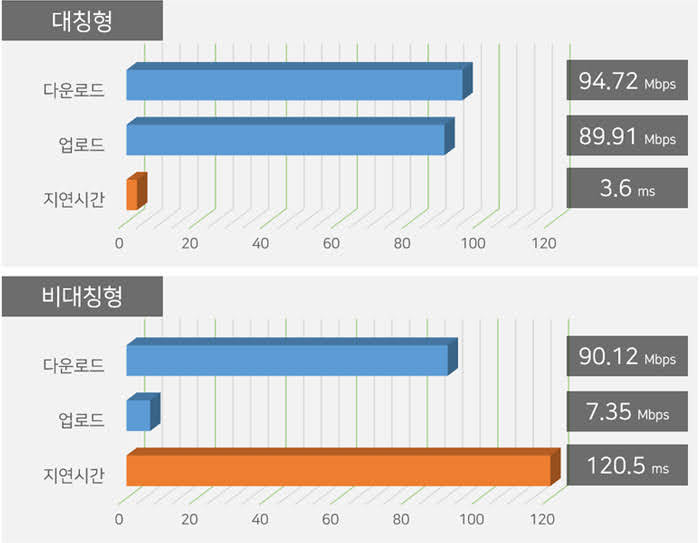 When I asked the KT installer who came to install the internet, he said that it is asymmetrical if it comes with a copper cable instead of an optical cable.

Symmetry may not be supported for each building.

Symmetrical support varies from house to house. This is because there are some in the neighborhood that come with copper cable instead of optical cable.

When I called SK Broadband, they didn't say that my house is asymmetrical, but they said that they couldn't increase the speed.

In my neighborhood, SK Broadband seems to have not installed optical cables.

We reviewed a few items in our home situation.

Does symmetry come into my house?

To change to symmetric type, you have to change the Internet carrier. Changing to a symmetrical type is not a copper cable, but an optical cable, so the speed is faster.

When I asked the KT Internet installer, he said that the copper cable was used for VDSL. ㅠㅠ

How do I know if symmetry is coming into my house?

You can check which products you subscribe to by entering your address on the Internet website. The carrier's website doesn't even tell you if it's symmetrical or asymmetrical..

I consulted and signed up through Baekmega.

When I called my home address, he told me that KT Internet works at Baekmega.

LG Internet is said to be known only when an installer comes and checks it. The installer will come and check it out, and if it's not symmetrical, you can cancel it.

I decided to just use KT Internet.

Is there a discount mobile phone family discount?

LG Internet has a fixed company for LG U+ Thrifty Mobile.

There is no reason to spend more than 4 won on a budget mobile. Unlimited calls + Unlimited text data 6GB + Unlimited (1MB) 16000 wonBut what~ I decided not to do the family discount.

Router rental vs. buy a router

Still, I decided not to rent the router.  Write Wi-Fi 6Gbecause it was done with

A total of 9 won (5 won in cash, 4 won for a gift certificate) will be given at Baekmega. I applied for 4 won as an E-Mart gift certificate. I think you can use it at Seogwipo E-Mart.

Changing the router made it faster

When I checked, the existing router was Wi-Fi 4th generation. new Buy a Wi-Fi 6th generation router and measure the speedIt went from 16Mbps to 95Mbps. It was measured right in front of the router.

The speed was the router difference!

By changing the Internet to symmetrical, the download and upload speeds are similar.

Above all, there were many times when the quality of YouTube was blurred, but it disappeared. When viewing Google's 2-degree VR in Oculus Quest 360, the picture quality has noticeably improved, and it seems that virtual reality is a bit more realistic.