There are many useful services on Naver, such as cafes and blogs, as well as search.

However, when I go to search or check my e-mail, I often get caught up in the headlines of news articles. In particular, political articles are often at the level of fraud, so they try not to see the possible news itself.

Previously, Naver had three mains. Everyone knows www.naver.com, search.naver.com has only a search box copied from Google, and MyYahoo! Same desktop main.

For Naver search, I used search.naver.com with only a search bar, but it disappeared sometime. So, I used m.naver.com when searching Naver on a PC. However, from when on, the content looks like a PC.

To go to Naver search or other Naver services, go to Naver main, and then set and use it in the following way in order not to watch the news.

Newsstand does not edit articles by Naver, and when a user selects a media company, the articles edited by the media company are exposed on Naver main.

This function was applied on April 2003, 4. This is the day Naver pushed back the experience of using internet content sites to 1 years ago.

The headlines of the news articles on Naver Main were covered with sensational fishing articles from the media. Clicking on an article takes you to an Internet newspaper site, which is overflowing with all sorts of sensational advertisements. Internet newspapers could not use the traffic they received from Naver properly and put sensational advertisements on their clothes pages for immediate income. About three years later, I started to apply a UI that traps the traffic that came in once.

Naver launched Newsstand, a service or a function. Allow users to choose the press. Are you sure you want to delete it when you delete the mail? I asked the user about the reason for putting in the dialog, and it is like saying that it is the user's responsibility, not my responsibility, saying that the user made the decision.

Naver gave up the influx of Naver News from Naver Main and its ad sales. Rather than fighting with the media, he would have given up on sales.

Naver Mobile has been editing news articles, but this is partly because newspapers overlooked mobile, and because the content contract is a domain, I didn't pay for mobile separately, but it seems that I got more money through a separate mobile news contract around that time. I'm watching to see if the newsstand will be on Naver Mobile anytime soon, but it's not there yet. I've been watching it since 2009, but it's not there until 2021. It seems that the media have not yet pecked Naver enough to give up news on mobile.

Anyway, thanks to the newsstand made with this background, if you cancel all subscriptions to the media, you don't have to look at the list of articles on Naver's main page.

Hide one line of news with adblock

I don't know when, but a line of news has appeared on Newsstad for quite some time.

Unfortunately, there is no setting that can be turned off by the user.

So the browser adblock plugin blocked this part.

In my case Unicorn Plugin in Mac SafariThis can be prevented by setting a block as follows. 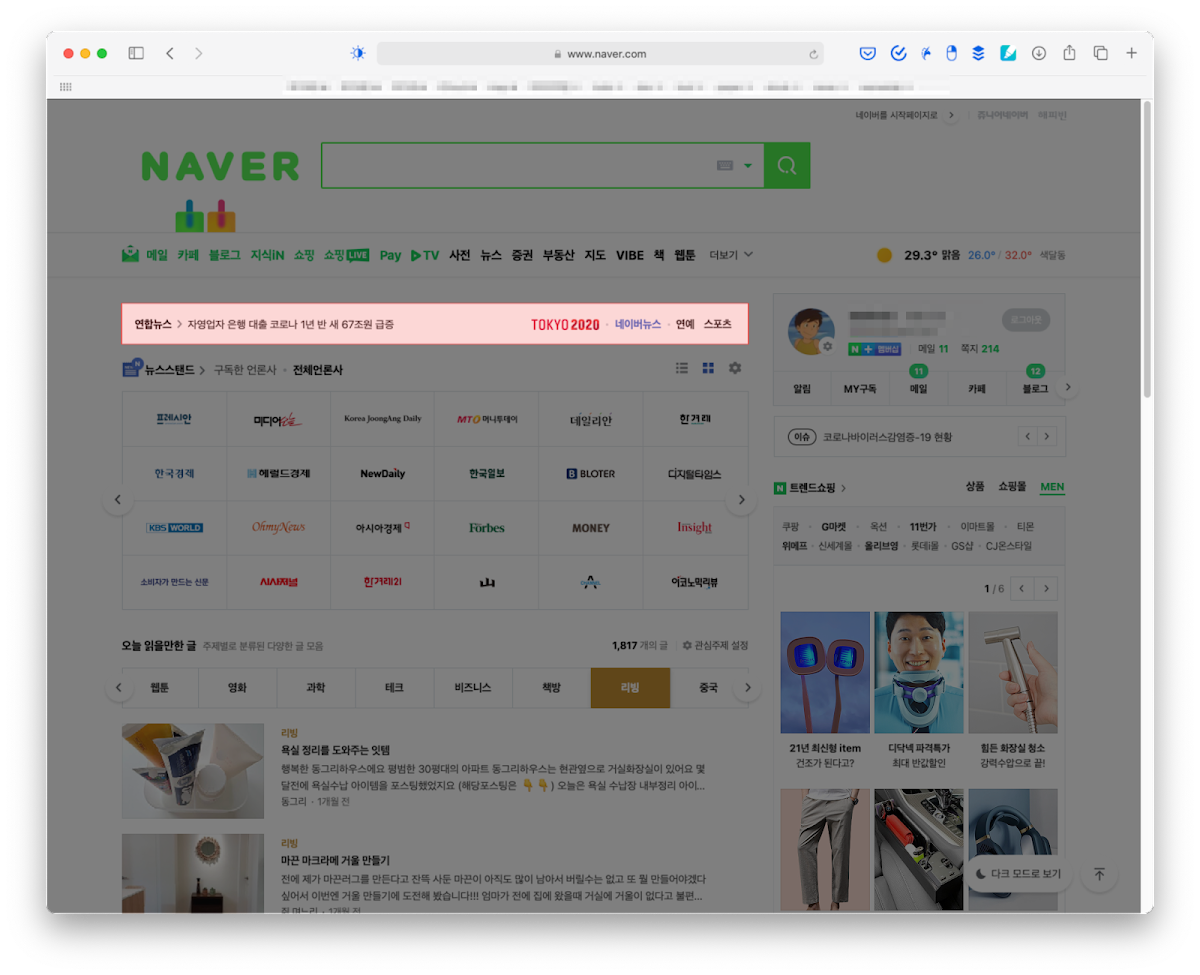 Other Abblock can also be blocked by setting a block, so you can find out the function of the Adblock plugin you are using.