As Lion, Mac OS 10.7, resembles iOS a lot, it adopted the iOS method of iPhone or iPad for touch gestures especially for scrolling.

The biggest change is that the scrolling direction is reversed, and then swiping left and right as if turning a paper when viewing the previous/next page in Safari/PDF view/full screen was added.

Scrolling originally refers to a scroll, but in a computer, it refers to lowering, raising, or moving the screen left and right in a frame like rolling a scroll so that a larger area can be viewed on a monitor screen of a fixed size. Create an interface element called a scroll bar. If there is an area other than the visible one, scroll bars are displayed on the top, bottom, left and right of the screen, and if you pull this, the screen scrolls.

When viewing a web page on a Beam project or a monitor together, someone says “look up the page” to see the bottom of the page that is not visible on the screen, but the mouse manipulator?

The person who told me to turn the page up was telling me to scroll down and put the paper up in order to see the invisible bottom, but the person holding the mouse heard "Page up" and scrolled up. When we scroll up, the screen goes down and we get to the top of the page.

Scrolling on iPhone and iPad

In the case of touch, the concept is not to hold and raise the scroll bar, but to slide the paper up or down with a finger within a set screen frame.

wheel mouse is a roller

I want to use the Mac Lion's touchpad gestures, but the mouse wheel scrolling is reversed

I want to use the left and right paper swipe gestures on the Mac Lion's touchpad, but to do that, I need to turn on the natural scrolling option. If you look at the video above, when you go to the previous or next page in the Safari browser, it is like turning a page. When moving the entire screen or when previewing a pdf, two pages are displayed at once and swipe the touchpad like a book.

In the trackpad of the system environment, check 'Scroll Direction: Naturally' as shown in the following figure. 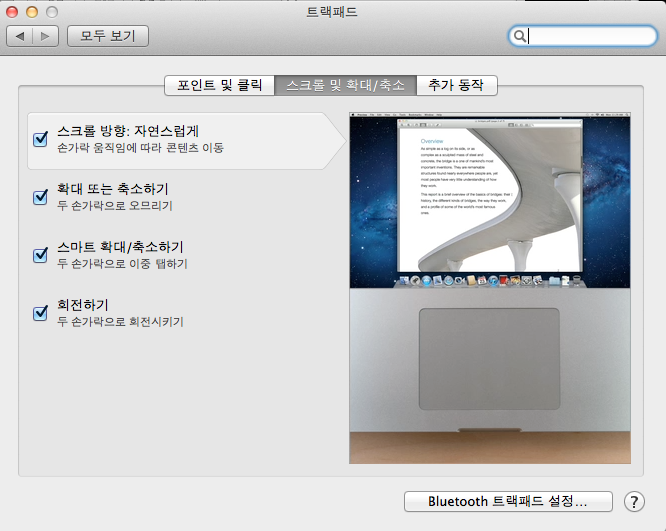 I'm so used to scrolling up and down with two fingers, but I decided to change my conceptual model, "I use my finger to go down, from top to bottom" to something like "I think I'm pushing the paper up to look down," as in the iPhone. .

The problem is that when you turn on natural scrolling, the direction of the wheel mouse is reversed. In other words, I rolled the wheel mouse toward me to move the screen up, but now I have to roll it up. This makes it inconvenient to use as the conceptual model for the roller and paper that I have does not match.

Utility to reverse the direction of the wheel mouse

I asked this on Twitter and got advice to try SteerMouse.

It's hard to get rid of the roller concept of my mouse wheel, and it's a big deal that the wheel direction is reversed when using a Macbook on a Windows PC or other family members.

SteerMouse has a feature that allows you to select the scroll direction for the wheel's direction on the wheel mouse.

Download SteerMouse Once installed, you will be able to enter System Preferences and select options from there. 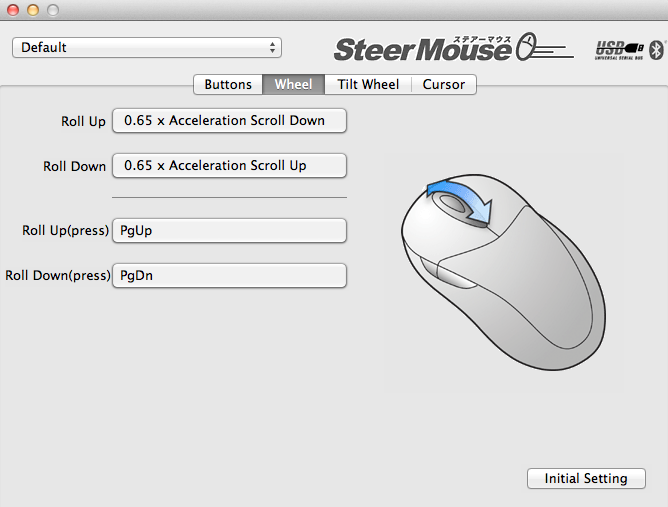 as freeware Scroll Reverser There is, and if you install this, the direction of the wheel mouse is correct. It seems fine. 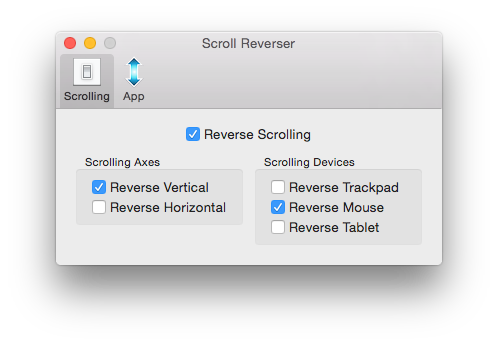 In the days of CUI (Command User Interface), when a computer's UI was used by inputting commands on a dark screen, pioneers in the HCI field created the concept of Direct Manipulation. Only Ben Schneider was famous. Direct manipulation refers to direct pointing and action of an object on the computer screen, and this has the same effect as the mouse, icon, and windows in the GUI (Graphical User Interface).

In 1979 or so, the Star Office of Xerox Park used the first commercial GUI environment and mouse, and I don't know whether Apple's Steve Jobs and Bill Gates went to Finguero Park to see an investment or something, and got an insight or copied it, but Apple OS and It is said that Steve Jobs received an investment from Bill Gates, and Bill Gates made IE or Office for Mac. The story fell into three thousandpo,,,,

Of course, if you swipe your finger left or right through the touchpad of the Mac, flipping the screen like a sheet of paper is also considered indirect manipulation. Scholars may call this direct manipulation, but I don't know.

When computers came to be used by the general public in military calculators, the pioneers of HCI at the time when HCI did not exist as a science applied the metaphor used in literature to make interfaces more familiar and use real world experiences to interfaces. did. The metaphor is mostly software dependent. BumpTop using the desktop metaphor 나 folder, OK-Cancel vs. Cancel-Confirm,  Mac OS X intent right button taken from traffic lights, desk screens, parks, or globes are shown, and interactions with icons and objects are similar to real-world objects. However, as computers have been around for several decades, a different metaphor has emerged from the computer itself.

The gesture for the touchpad made by Apple is interesting because it is a part of the input method, unlike the metaphors in the past. The metaphor of turning a bookcase has been around for a while, but it was just a mouse. Touchpad gestures place your finger directly on the touchpad rather than the mouse. So, I type into the computer in a way that resembles a swiping of my finger, a bit similar to turning my finger over a piece of paper. In order to feel this taste, you have to try the complicated things introduced above.