Departure from Mokpo at 1am and 9am

There are two ships, the Queen Mary and the Queen Genuvia, that take cars from Goal to Jeju Island, and they depart at 1 am and 9 am. 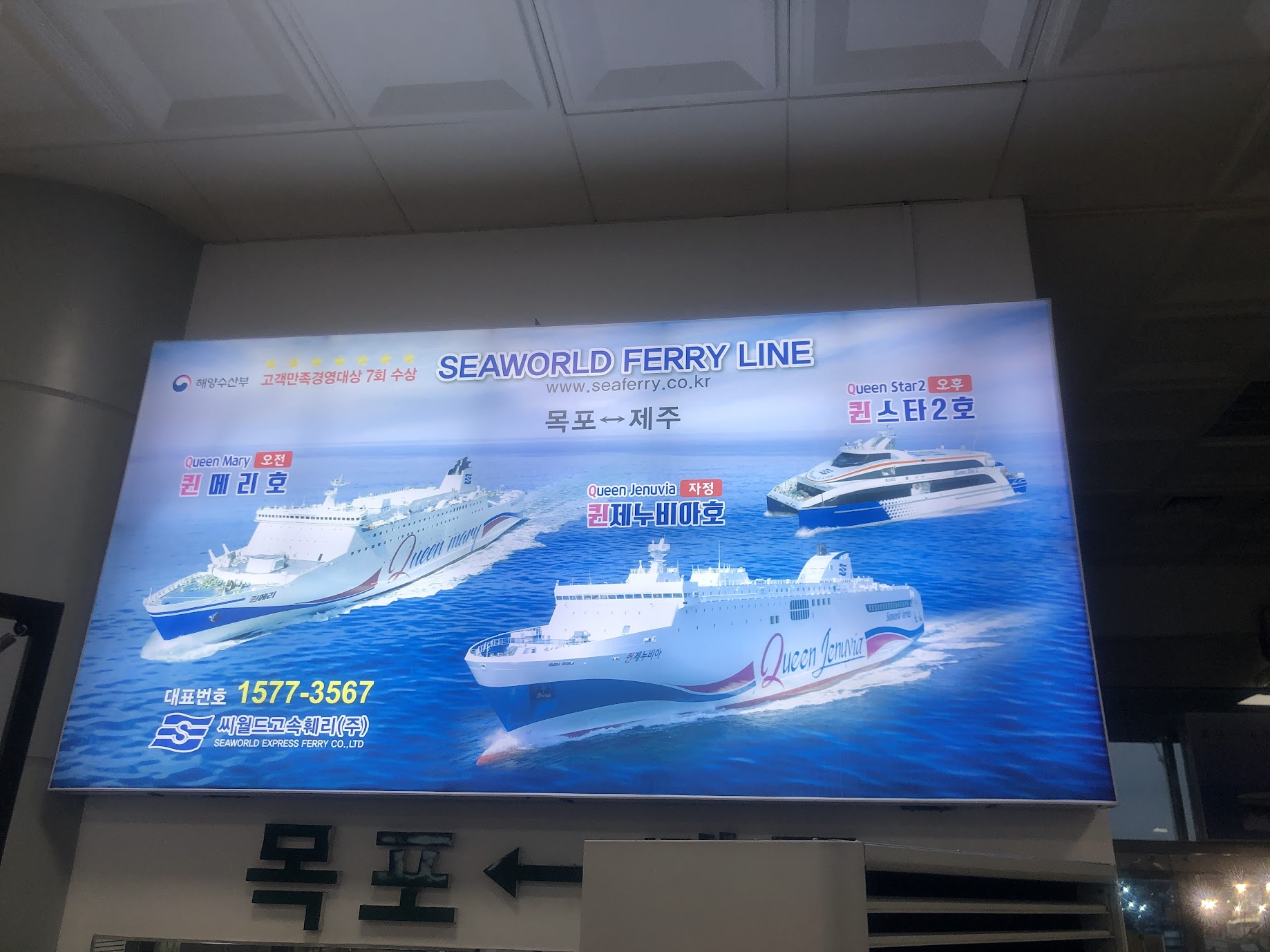 The photo was taken at the Mokpo International Passenger Terminal.

Depart from Mokpo at 9am, Queen Mary

The boat turns off well anyway, but to see the open sea even for a moment, I booked a ticket for the Queen Mary, which departs at 9 o'clock. (I've been accustomed to the term 'Pick-up', but it says 'Pick-out' in articles on the Internet or on ticket reservation sites.)

Cars have their own number tag, and ships have names. Like the Galactic Fleet Earth, the ship ends with something. Since the spaceship was based on a ship, it is attached to something like a ship. The reason this blog is called Dobiho is because it used the name of the ship.

Search by vehicle type on the websiteThen you can see the price. 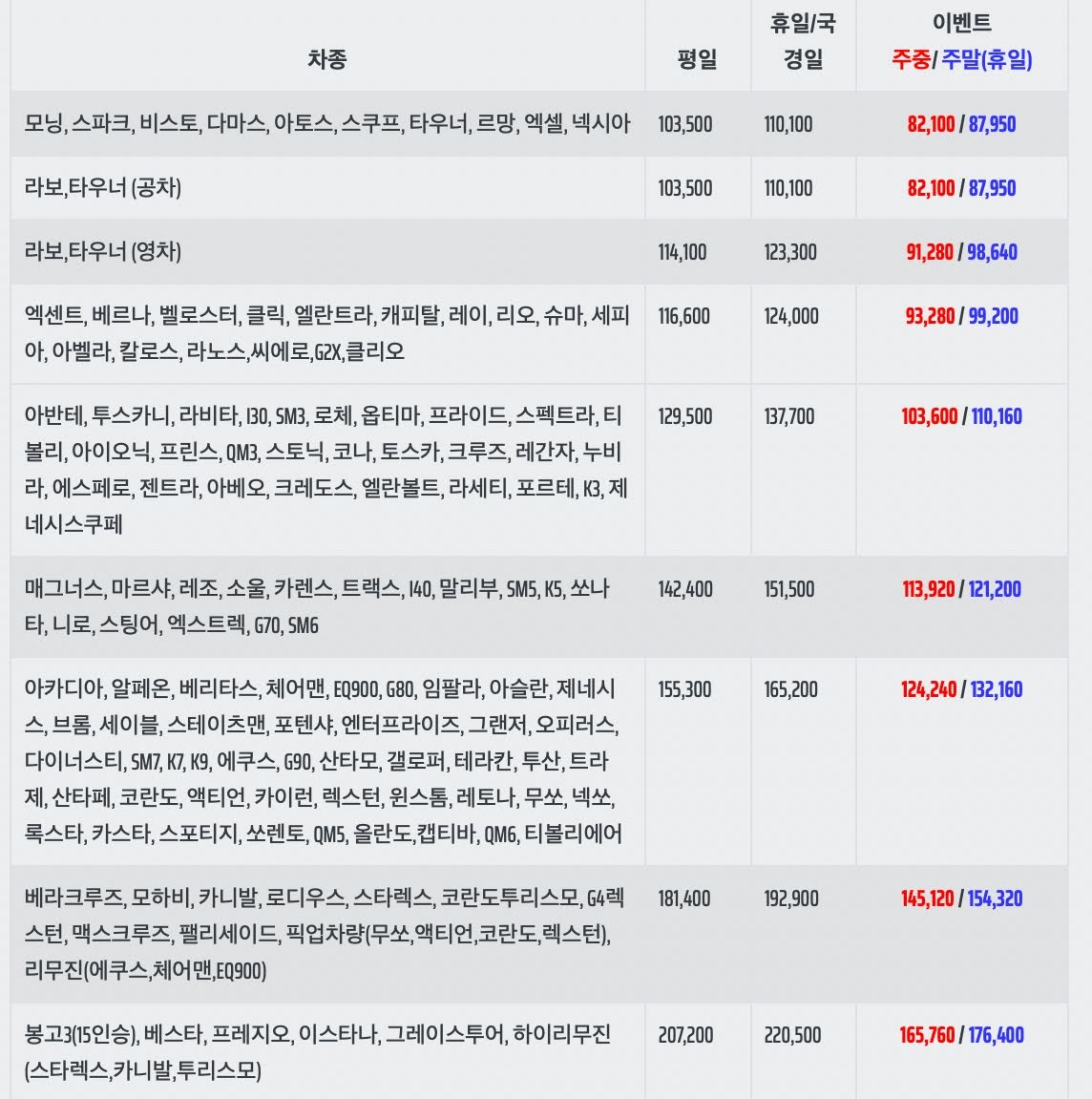 Reservation of people and car tickets in ticket heaven

People get a discount if they make a reservation through Ticket Heaven, a site that makes ticket reservations.

Each ship is different, but it is usually 10%, and for ships that depart at 1am, 50% is due to events. Discounts and discount rates are not directly visible on the website, but if you search on the reservation screen, the discount rates for each ship timetable are displayed.

If you book on BaePyo.com, you get a 10% discount on Queen Mary. Instead, you have to make a deposit. Reservation is made after payment is confirmed. You can pay with a credit card instead of giving a discount on the website of the SeaWorld Express Ferry website. 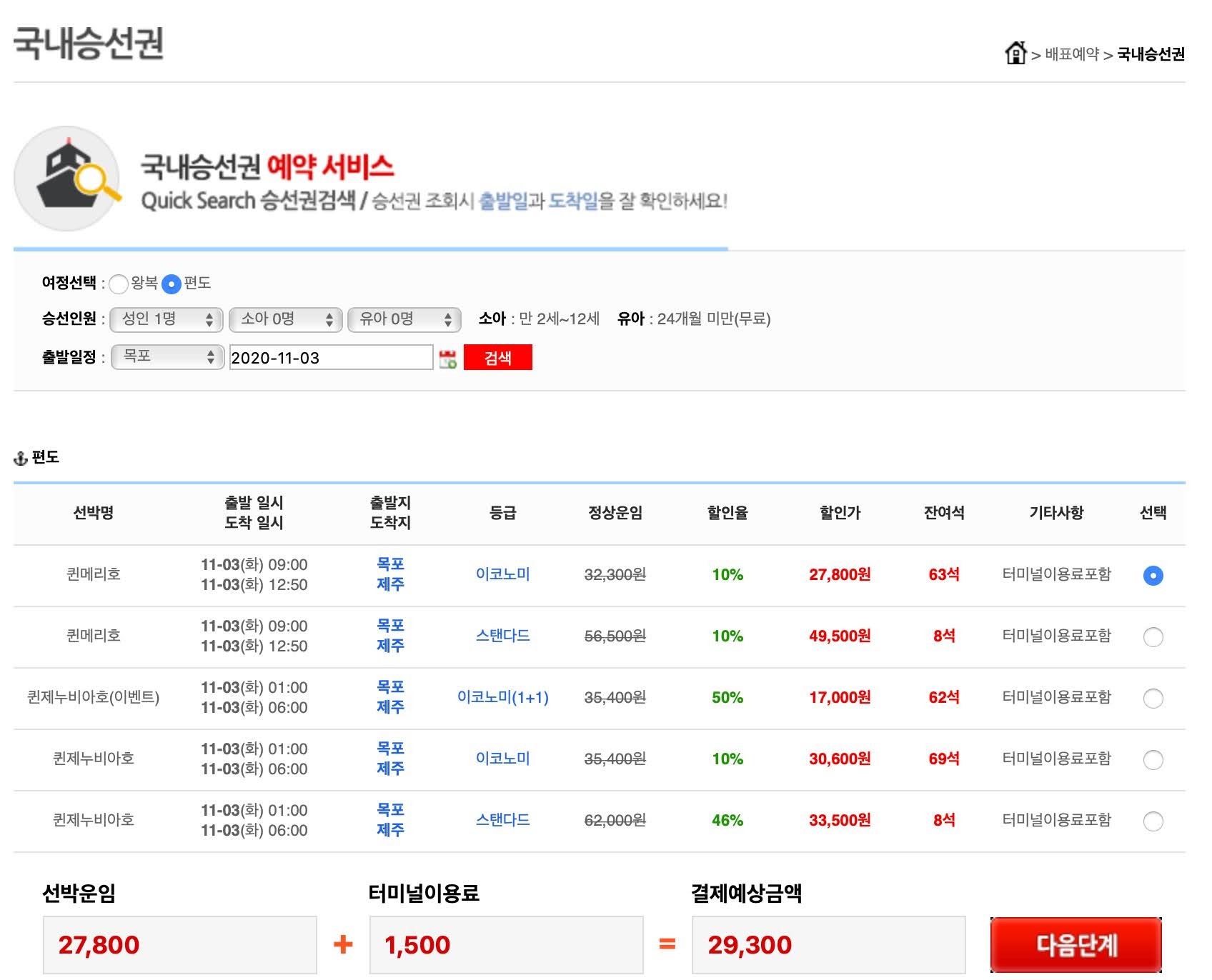 The reservation process at Bae Pyo.com is as follows.

After depositing, you can pay again by credit card. From the customer center menu on the homepage Apply for a cash receiptI applied for a place to do it. Write on the bulletin board.

Suddenly, something happened and I had to postpone the date, but the customer center did not answer the phone after 6 pm. of the homepage Q&A bulletin boardChange it by writing on it.

There is a system for the reservation request form, but the rest is a bulletin board and socialize with people. Although the site lacks a lot of IT, if you write an article on the bulletin board, a reply is immediately posted. 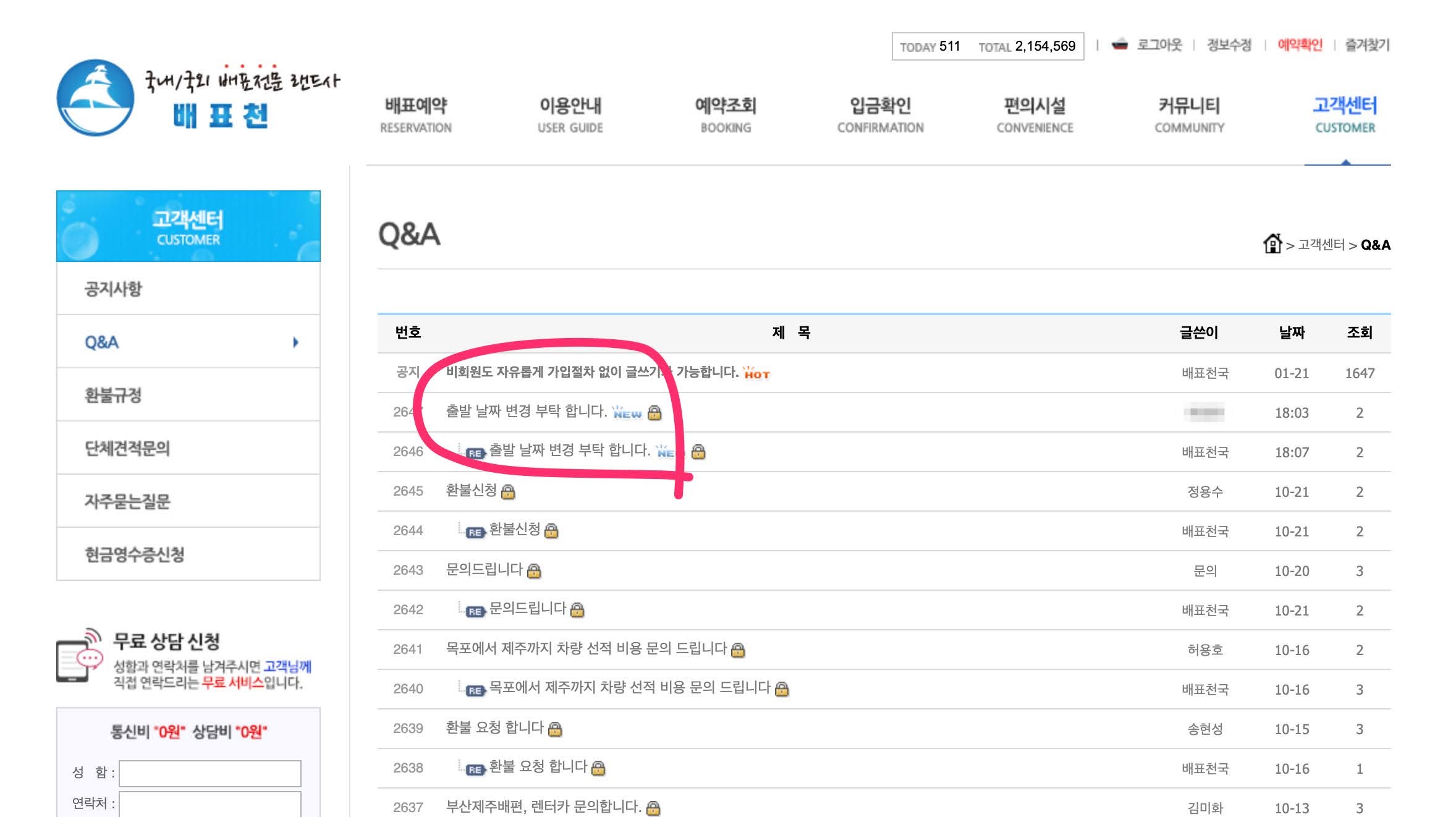 I made a deposit after a long time and wrote it on the bulletin board and tried to change it, but unless it is a site with a lot of users, I don't think there will be any problem if people respond well to this. It's 20 years ago, but the response is quick.

On the event page of the SeaWorld Express Ferry site, the Queen Mary was  2020% discount on cars for one year in 1do.

Reservations cannot be made through distribution.com one day before departure.

The Fumiri can load vehicles from the left side while looking at the sea and the passenger terminal. 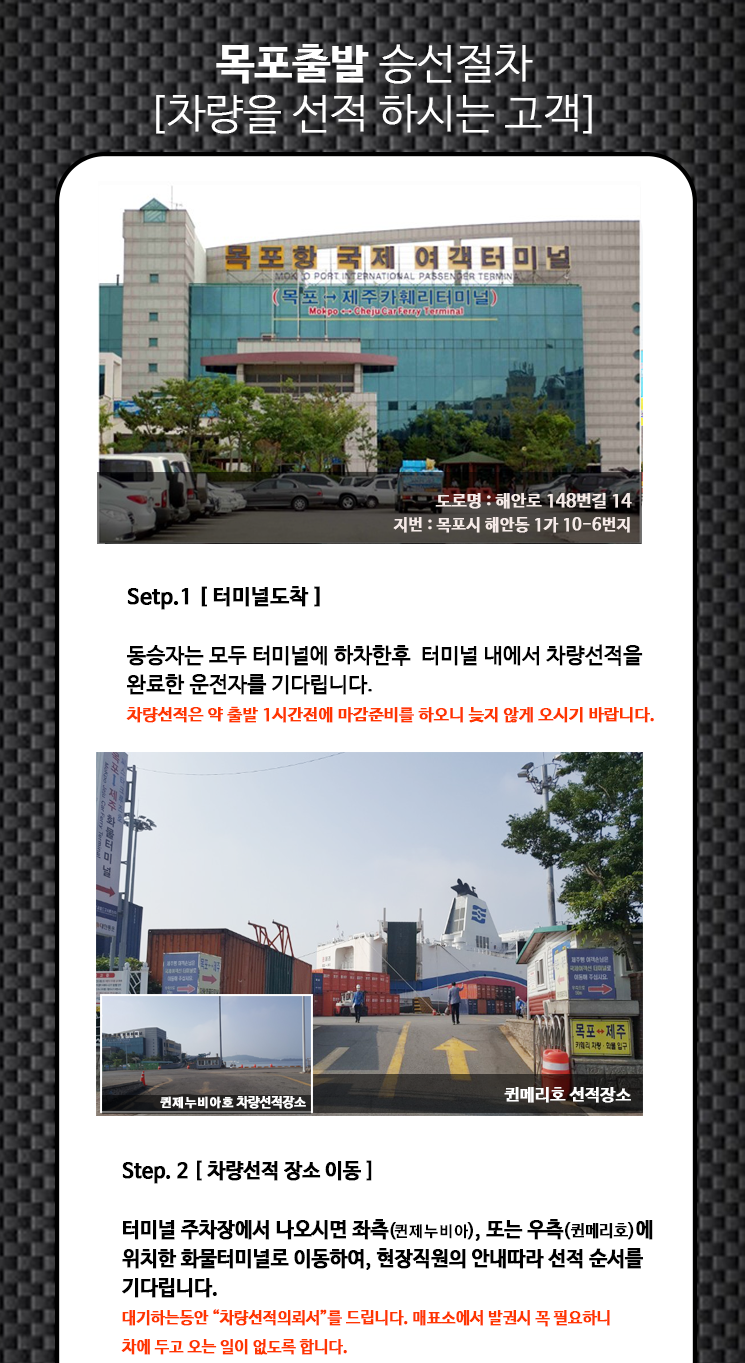 Passengers must disembark at the terminal and only load vehicles. After loading the vehicle, the driver must also get off and go to the terminal.

According to an acquaintance who went first, loading and disembarking vehicles comes first, and if they are loaded, they are unloaded first. The queue method is FIFO (First In First Out). This is because in Mokpo, the loading of vehicles enters the rear part and stops from the front part, and when disembarking, the vehicle waits in the front part.

I woke up early in the morning and just left and arrived at Mokpo Port at 6:30.

When you enter the loading area, there are guides standing there. There was no need to prove otherwise as it was verified by the vehicle number. The guide will give you a shipping request. Submit when purchasing tickets. 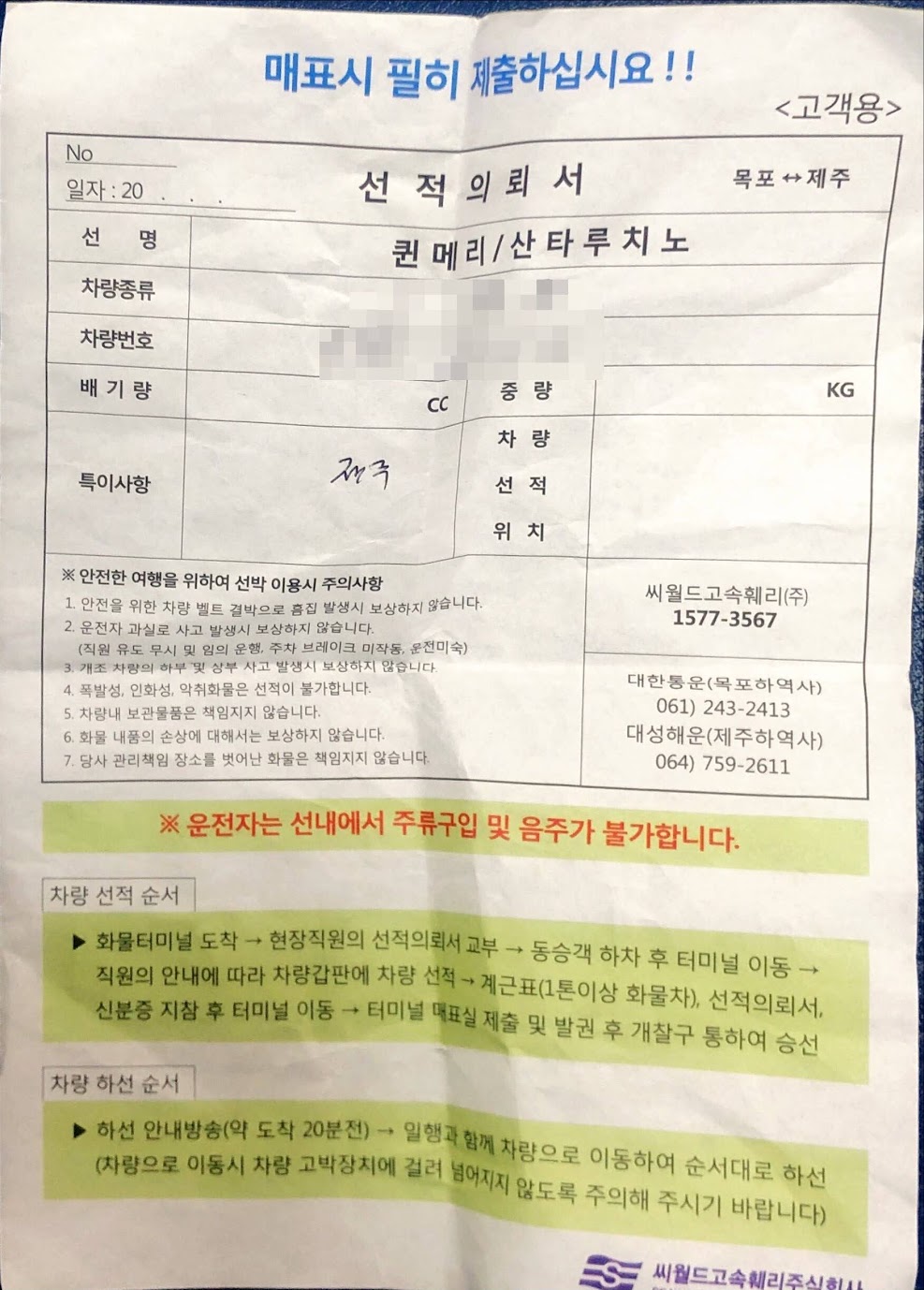 Receive a vehicle shipment request and ship it to the Queen Mary. 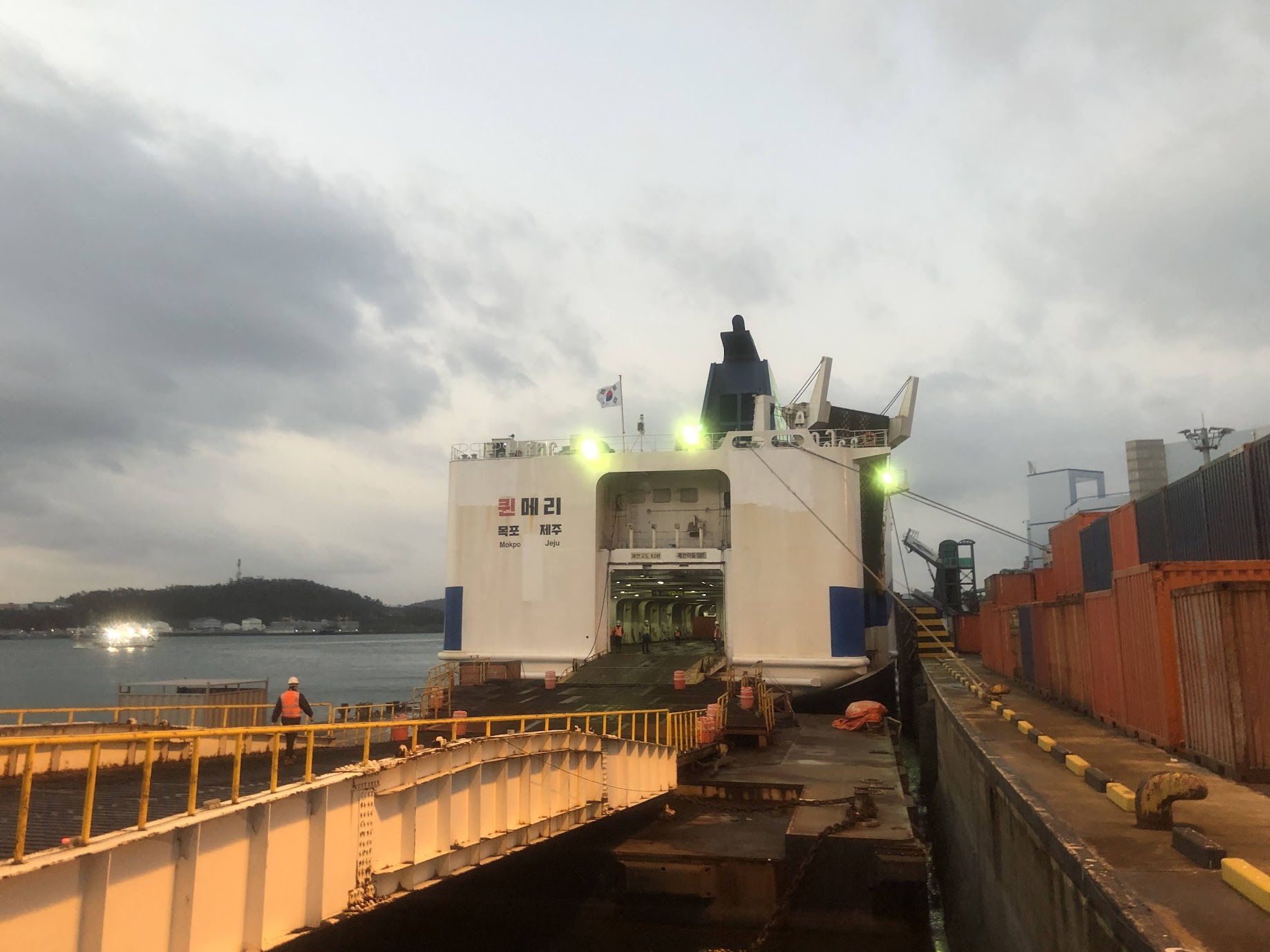 Follow the instructions of the crew on the deck of the ship to stop the car. The truck seems to be standing on the first floor, and it goes up to the second floor.

Hook the vehicle to keep it from moving.

When you get off, remember where you are on the deck. There is a floor on the ship, and there is a separate deck number, so you have to remember the floor and deck number separately. 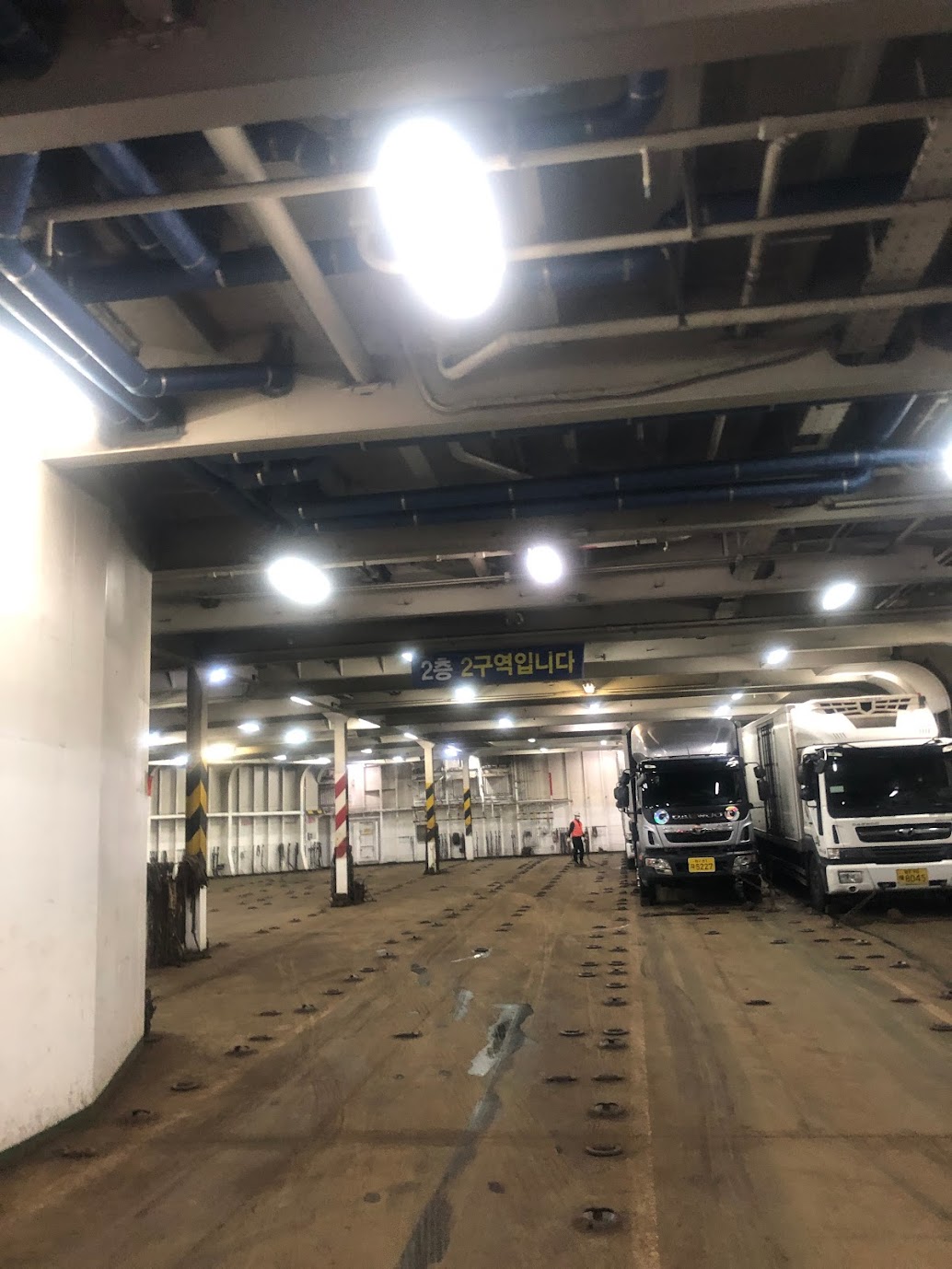 go to the ticket office

The driver must walk out into the car and go to the ticket office. 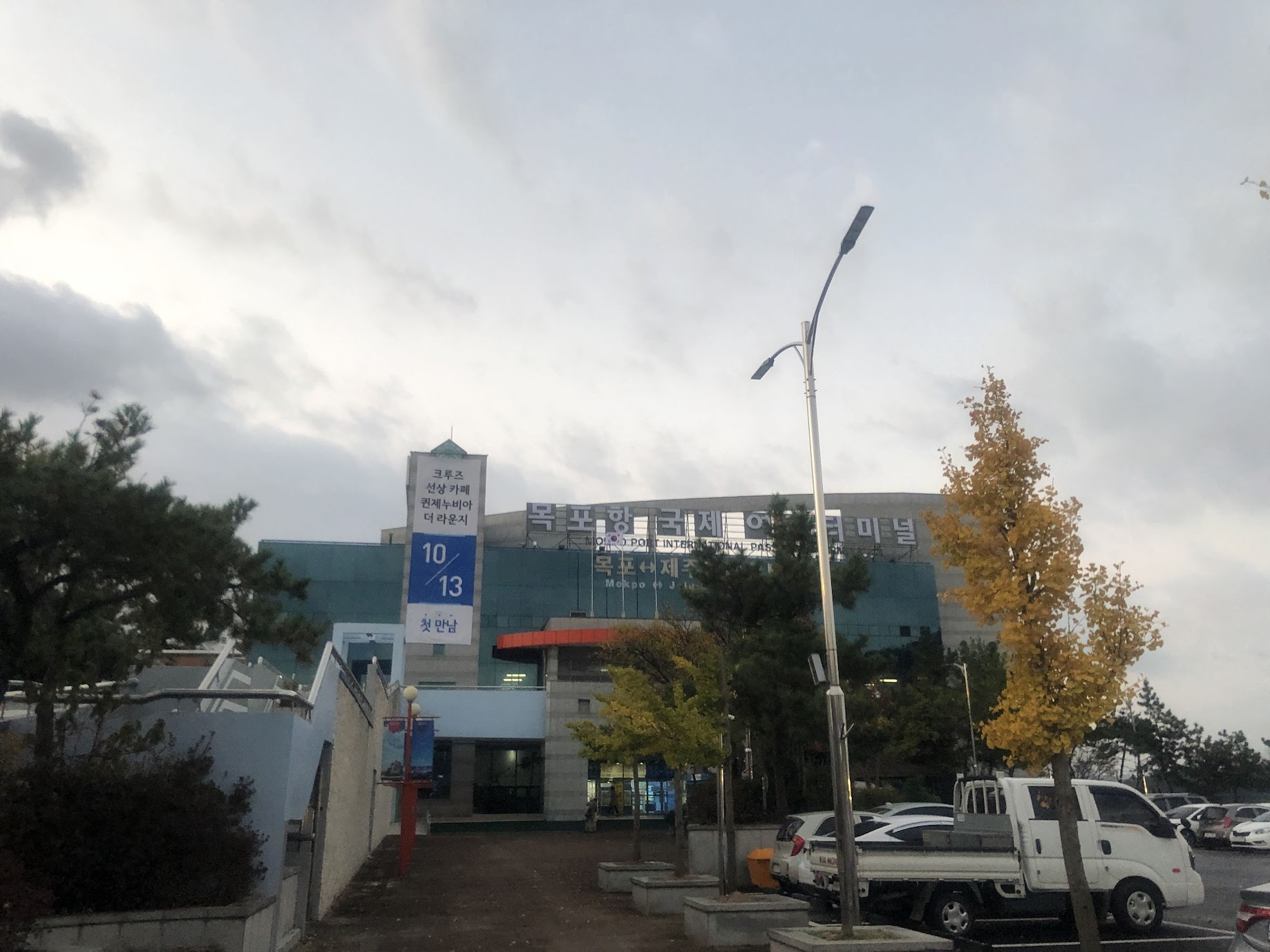 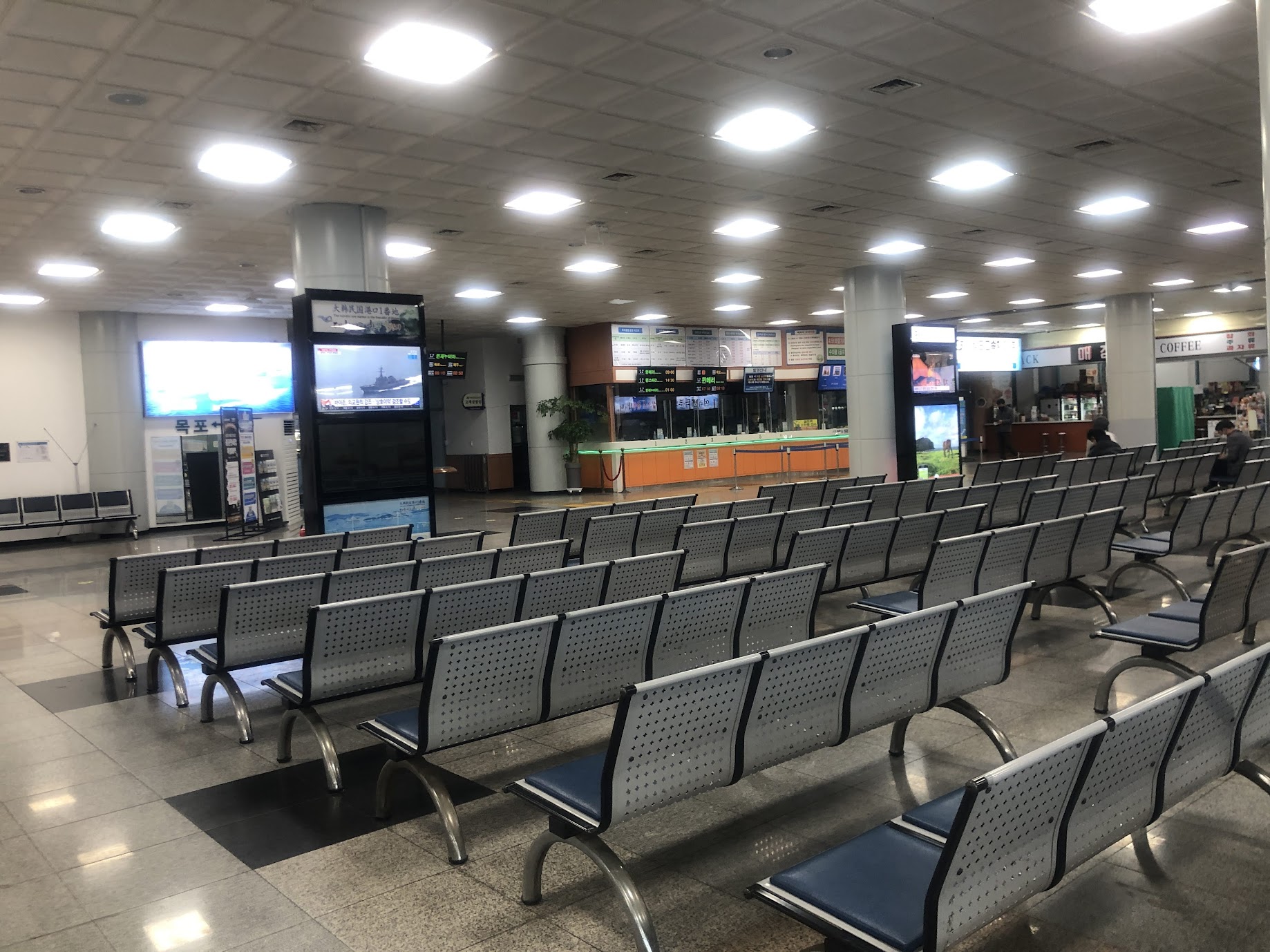 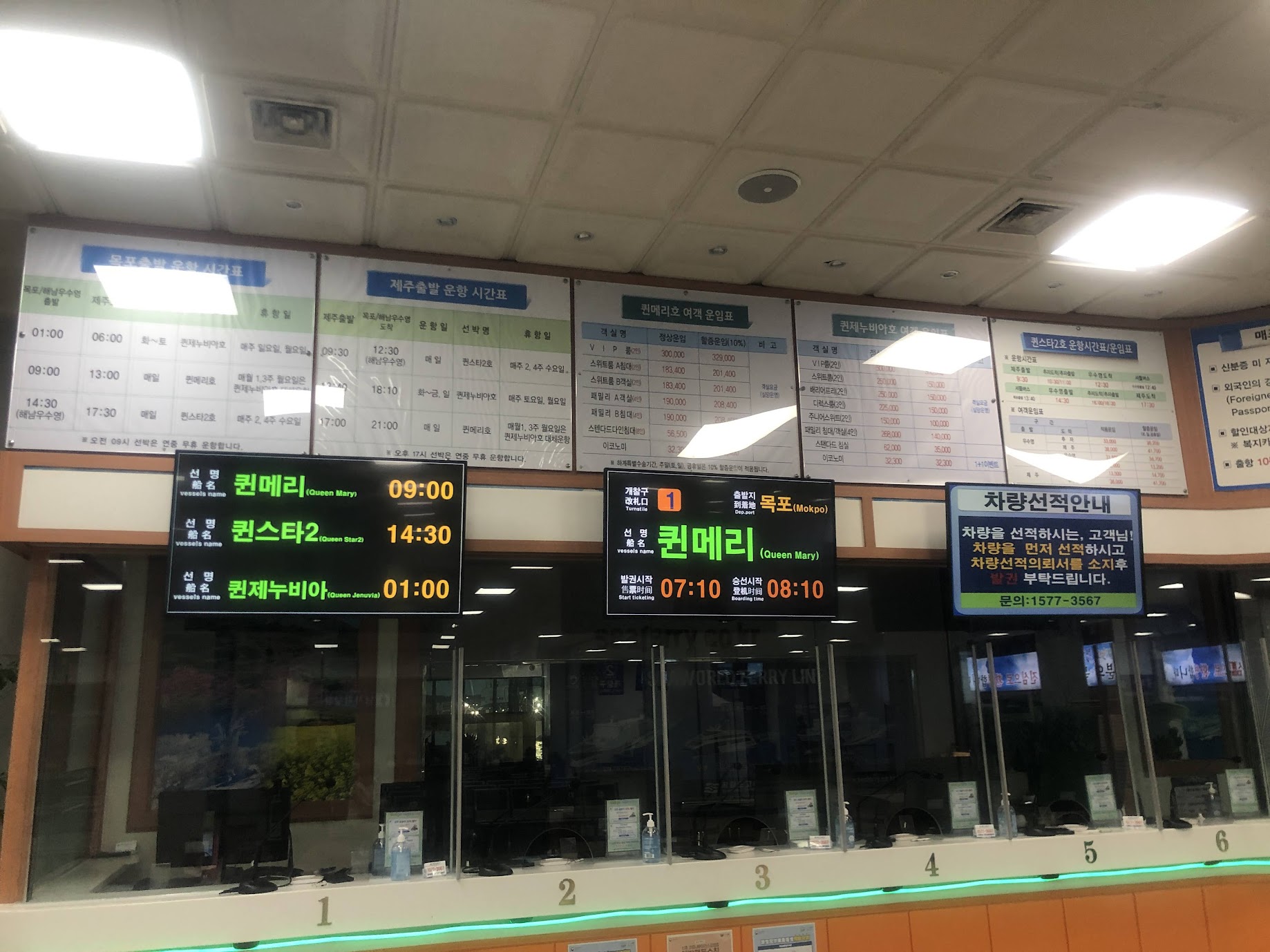 Go to the ticket office with your ID and vehicle shipment request. After the Seohae Ferry incident, a law came into force that required all IDs to be submitted on boarding tickets. Just like writing your name and cell phone number when entering a restaurant to conduct an epidemiological investigation in the era of Corona 19, the West Sea Ferry was created because it was impossible to know who was on the ship when the ship sank. The reason we can know who was on the Sewol ferry is because there was a law to write down personal information when boarding the ship in the case of the Seohae Ferry incident. So, when you board a boat to go to Udo or an island, personal information is written down.

You have to stand one at a time, but here you just need to show your ID. If you have a companion, one person can bring all their IDs and hang up. 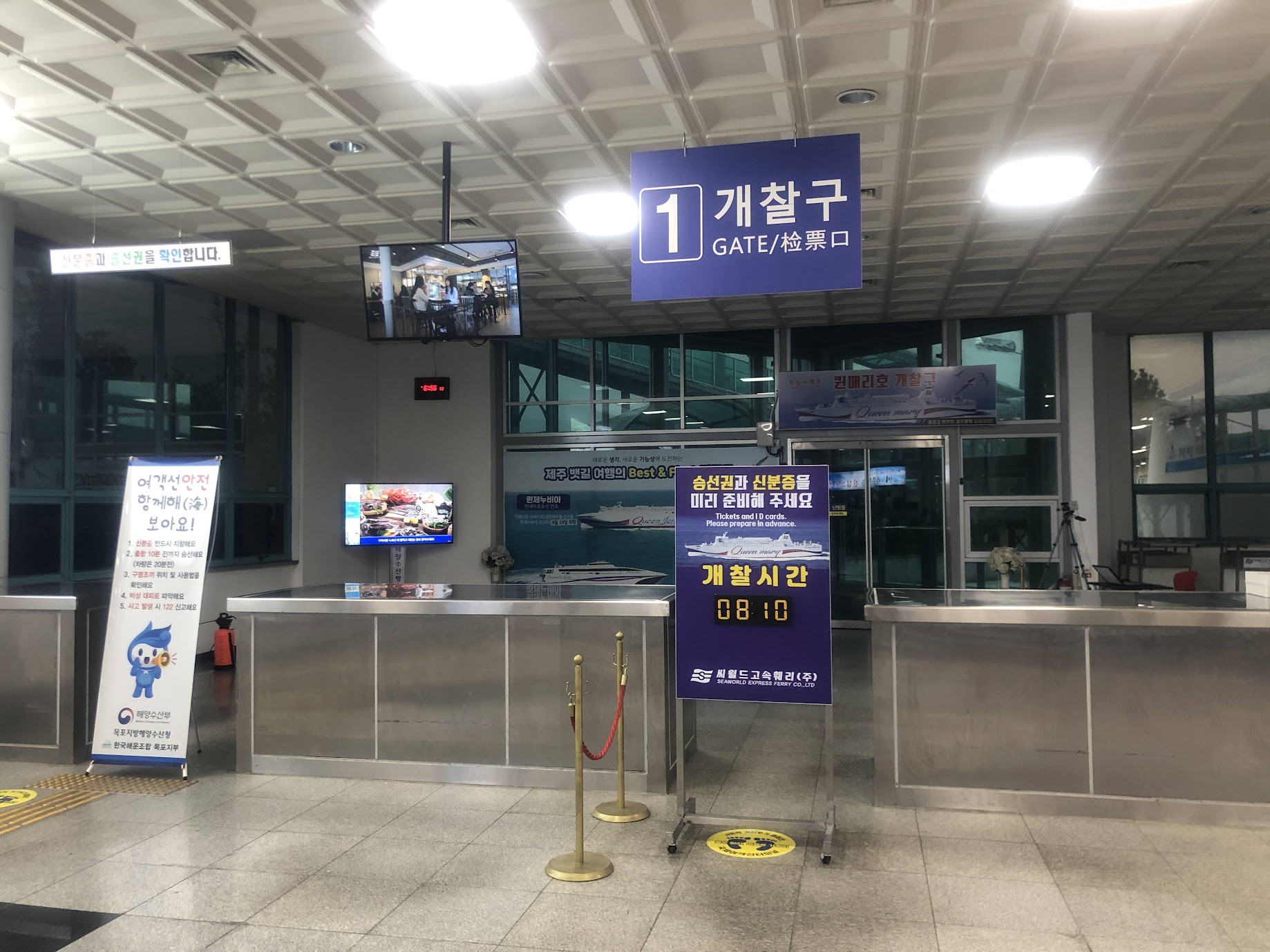 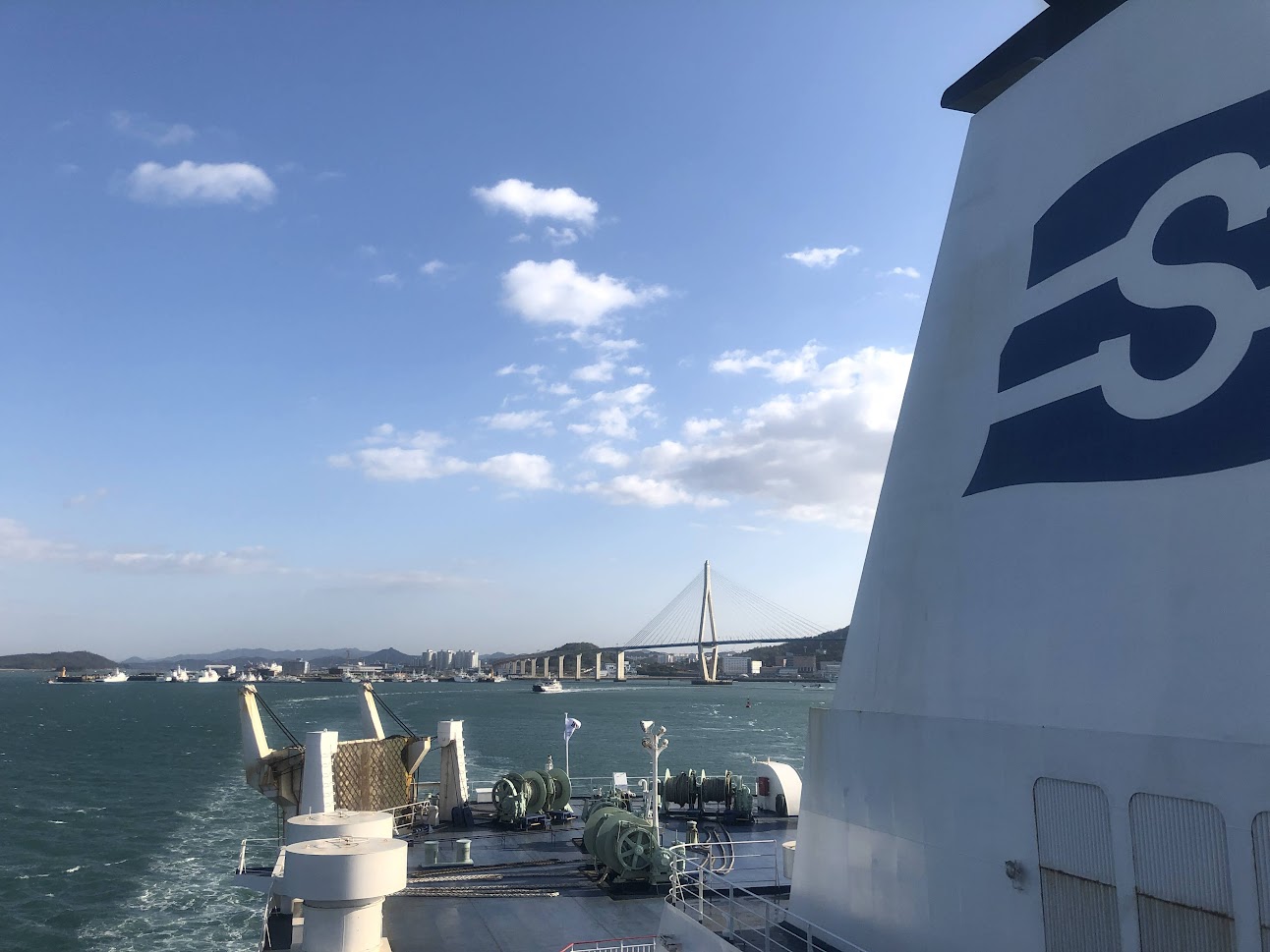 Economy, the cheapest ticket, is a room, not a seat.

Nowadays people expect seats on ships, but usually ships have rooms. The first time I boarded a ship with seats was in the early 1980s when high-speed boats appeared.

The advance ticket is 35,000 won, which is much more expensive than a low-cost aircraft.

Bring a blanket or pillow

It was a room, so I brought a pillow, blanket, and long padding to the car in advance and slept on it. The room has a warm fan, but the floor doesn't heat up. It is also a good idea to bring a blanket. Those who do not prepare for this can be seen sleeping. 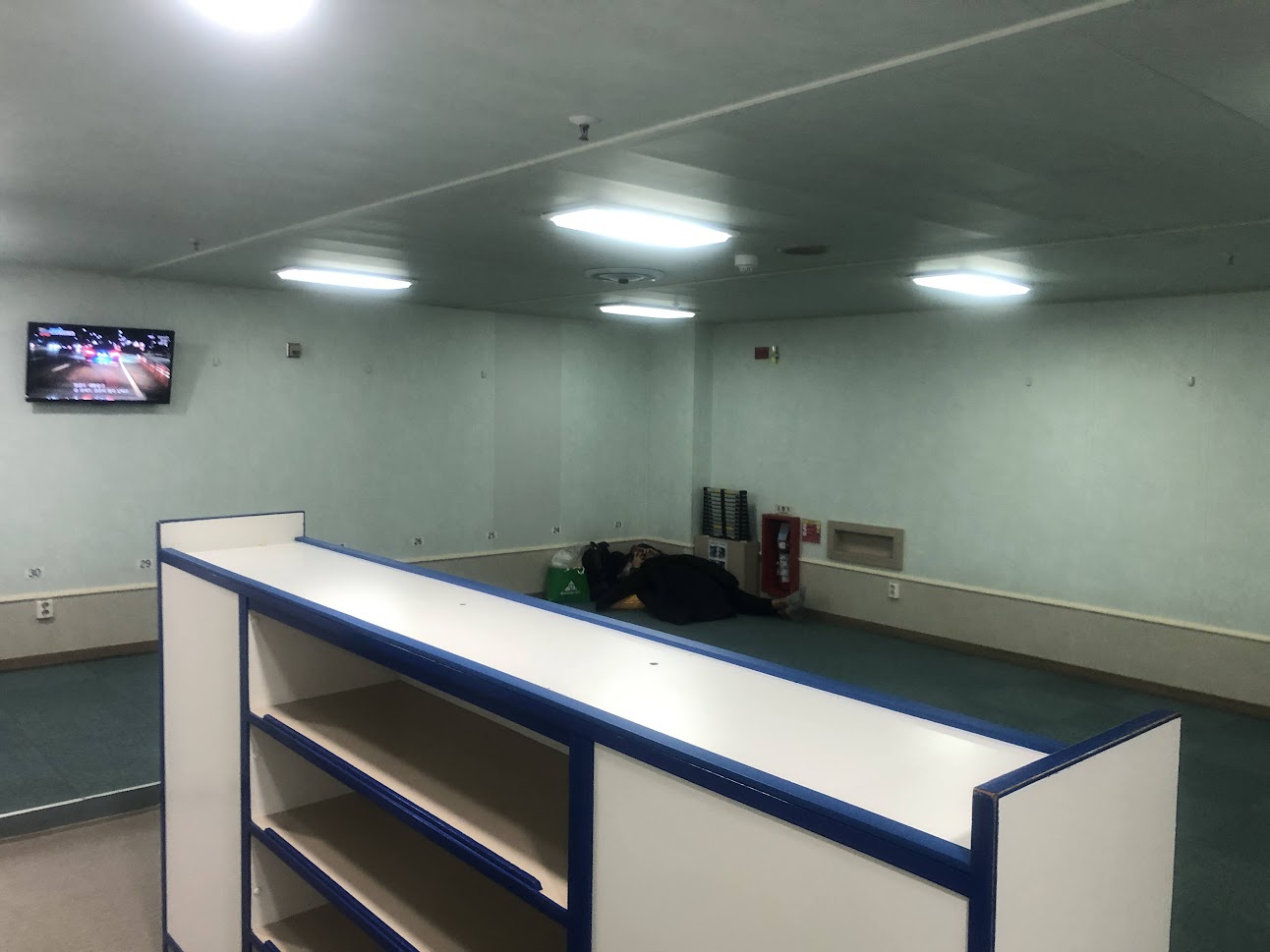 There is a small movie theater and an arcade, perhaps a cross-sun concept. Looking at the entrance to the cinema, I didn't go in because they were showing old Western movies. There was a convenience store and there was a place to eat with hot water, so there were people who ate cup noodles. 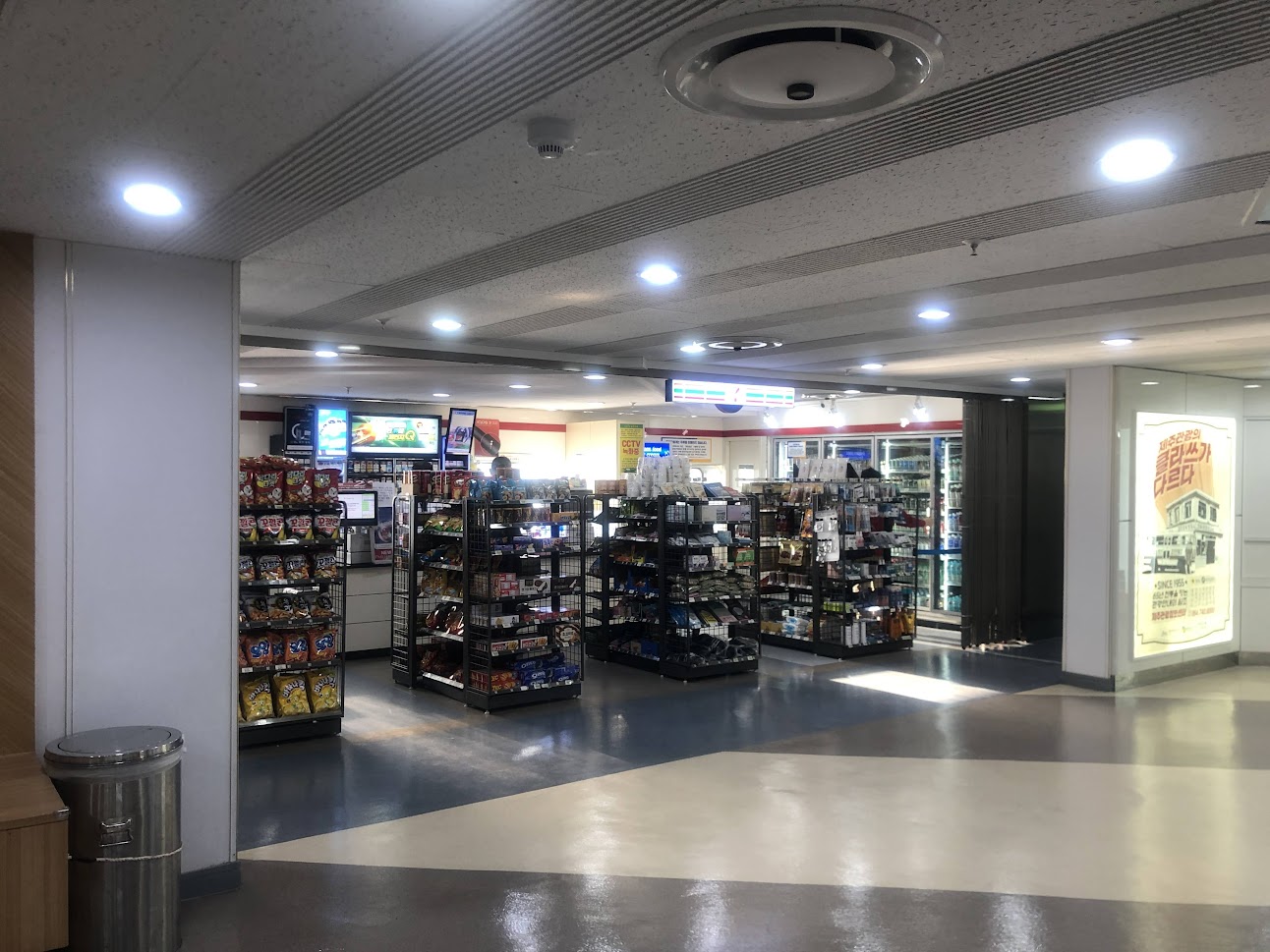 If you go out on the deck and go upstairs, there is a restaurant, beer and Paris Baguette on the same floor as the wheelhouse. 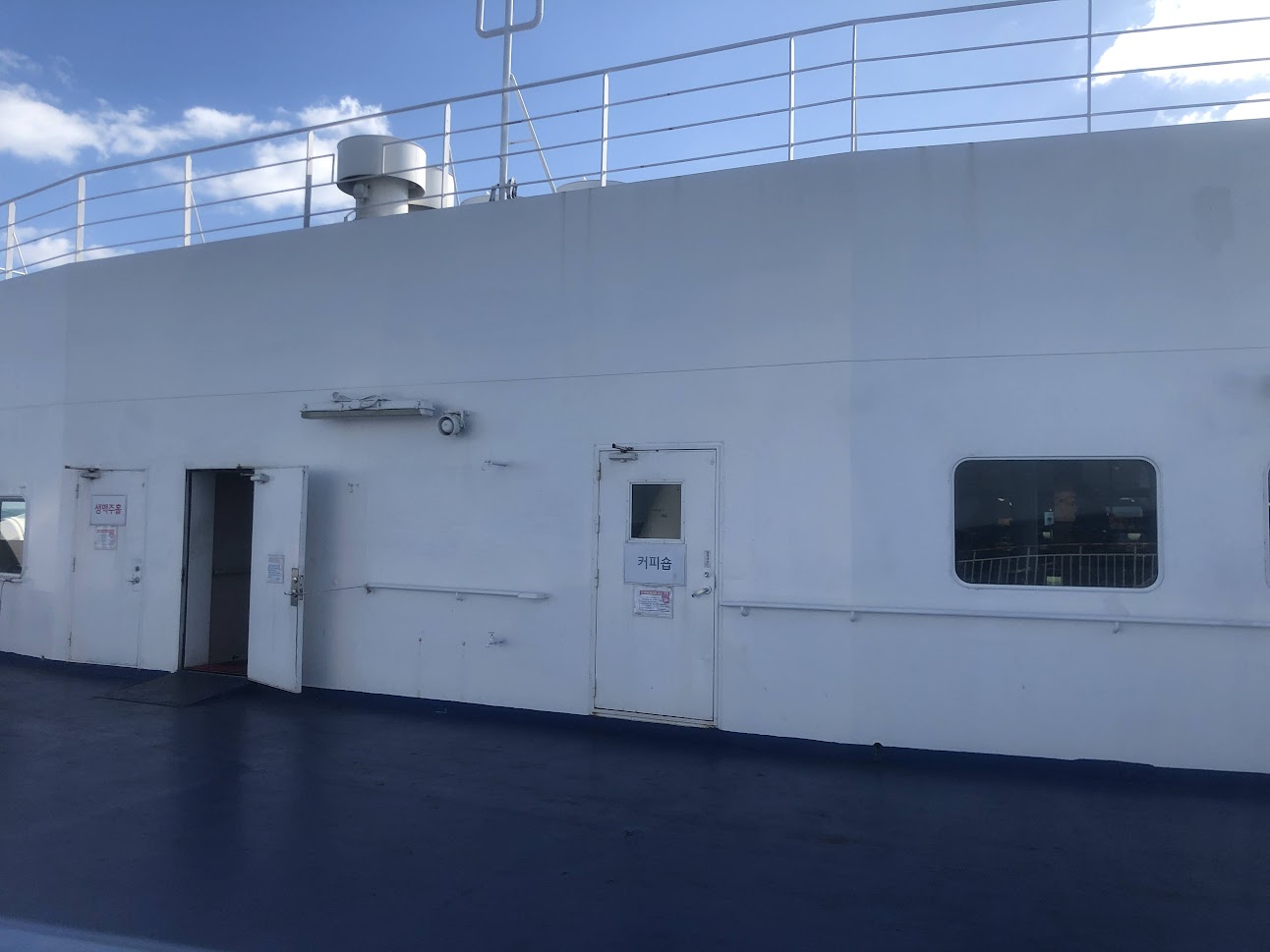 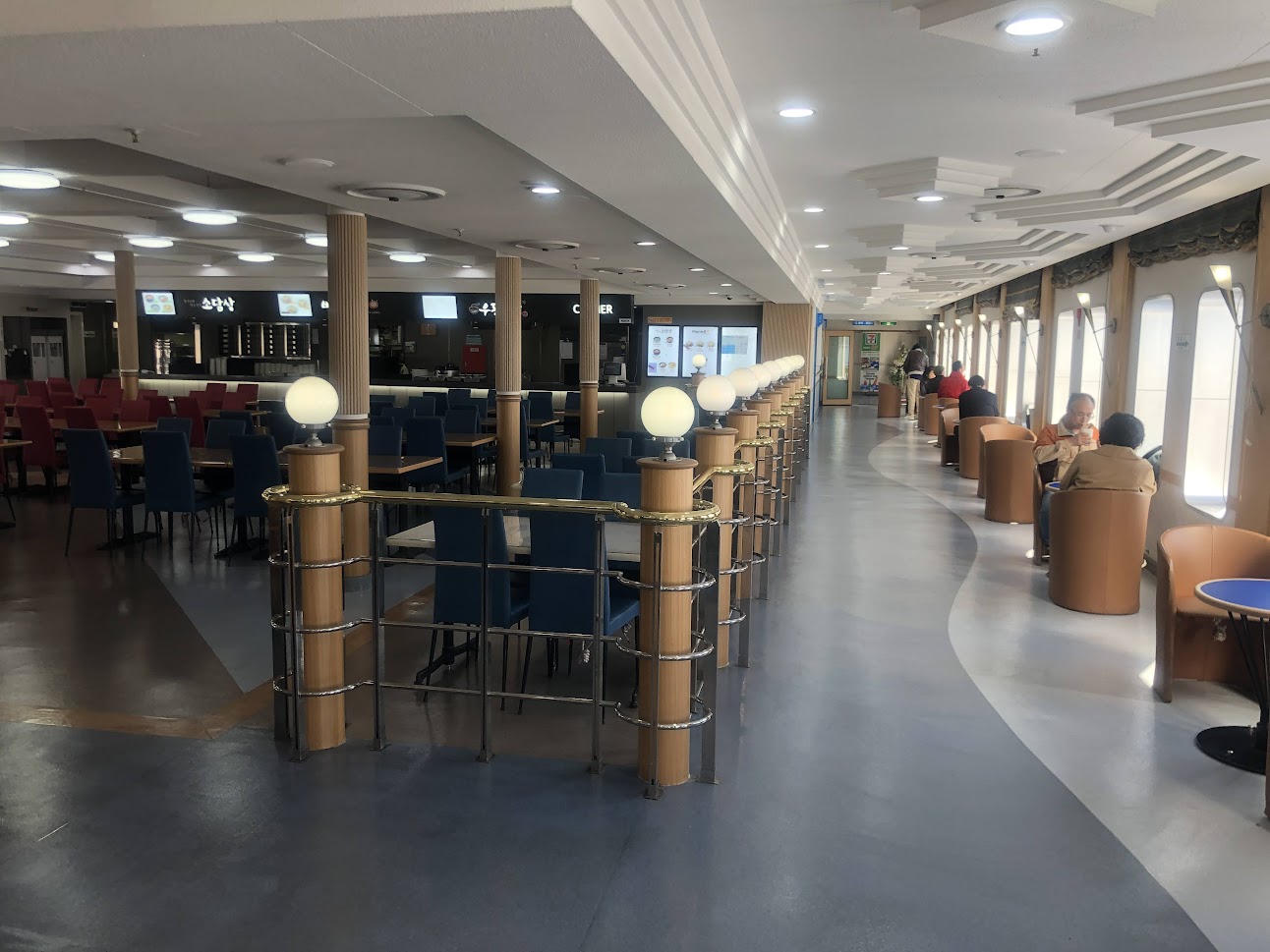 If you haven't eaten breakfast, you can have lunch. I took a picture of the restaurant menu, but the price and menu seem to be good. I was going to eat bibimbap, but I couldn't eat it because I was sleeping. 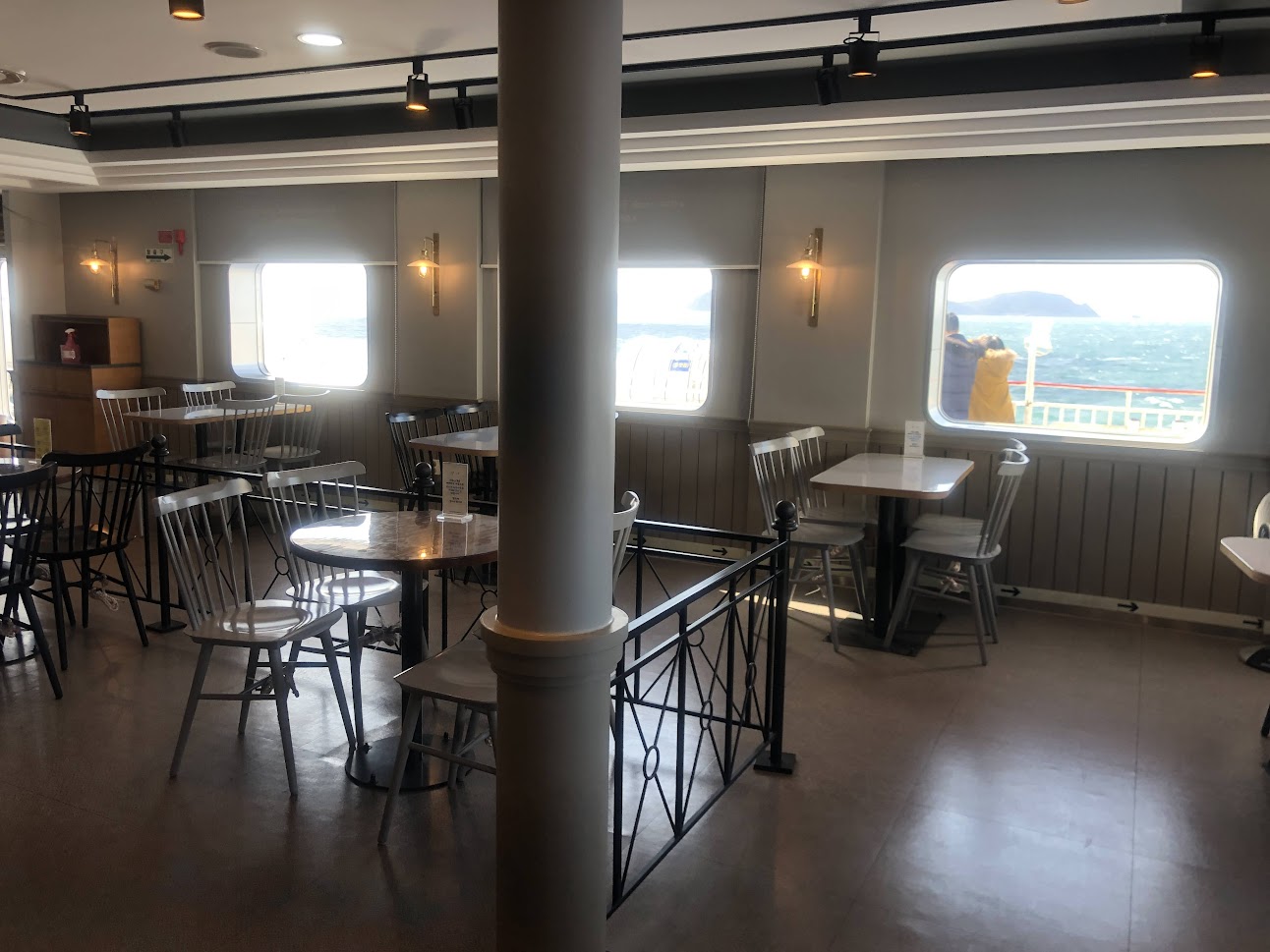 Coffee is not expensive either. I sat here and tried to code while watching the sea, but I couldn't sleep because of this. 😆

The guide says it takes 4 hours to arrive at 1pm, but it seems to depend on the tide level and the berthing condition of other ships in the port.

Jeju Port was photographed as the ship docked at the port. 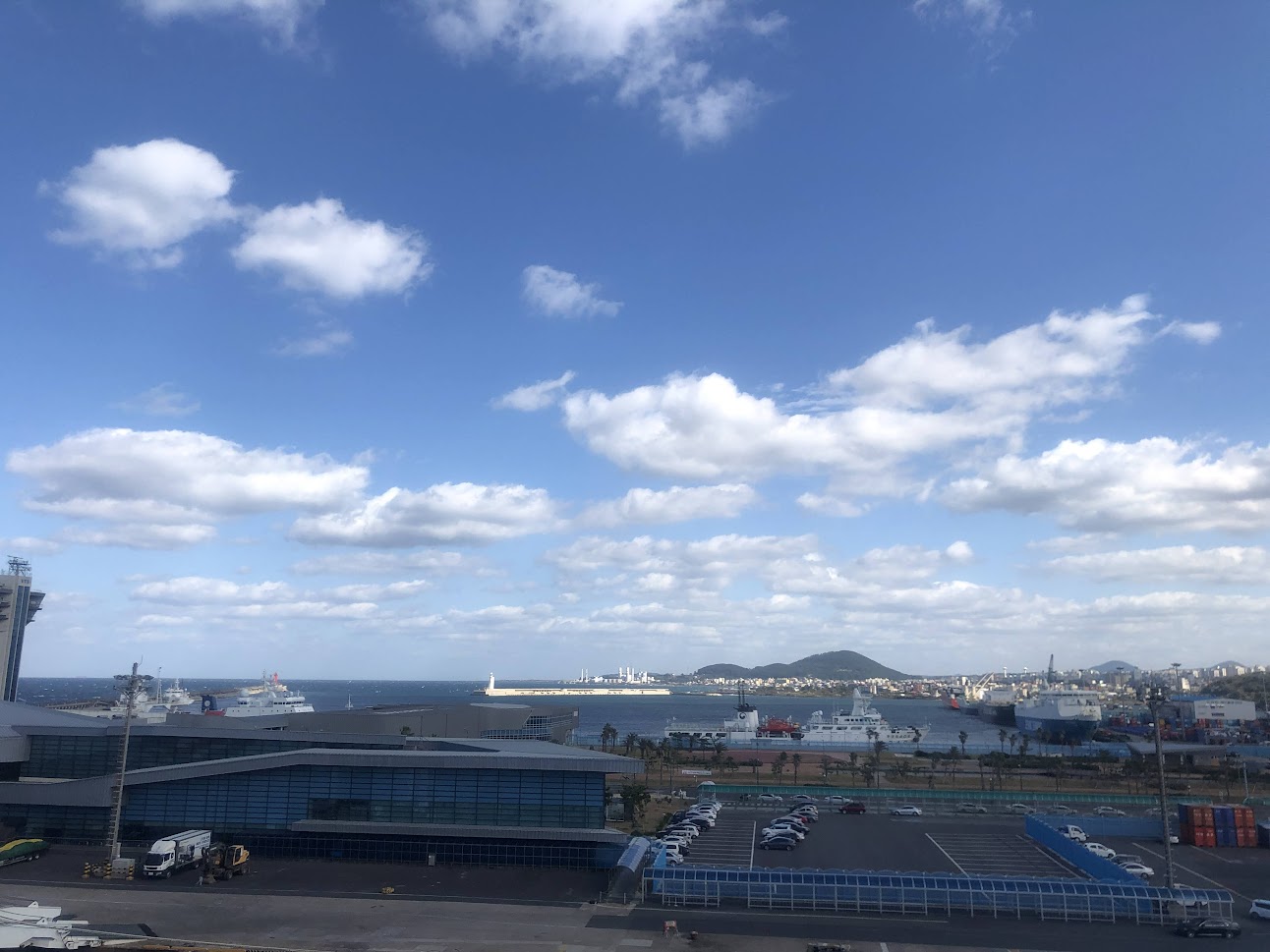 In the Corona era, after arrival, check the temperature of the Jeju official and board the vehicle

According to an acquaintance who had been there before, they got on the car about 20 minutes before arrival and left when all the general passengers got off. In the Corona era, thermal checks were required, so both the driver and passengers boarded the vehicle after a thermal check by a Jeju-do official.

When ordinary passengers get off, they stand in line in the hallway leading to the deck of the vehicle, and when an official comes up, they go to the deck after checking the temperature.

It took about 30 minutes from the time the ship reached Jeju Port to get out of the vehicle. In my case, at 6:30 in the morning, the car was loaded and put in the front, but it took that long. 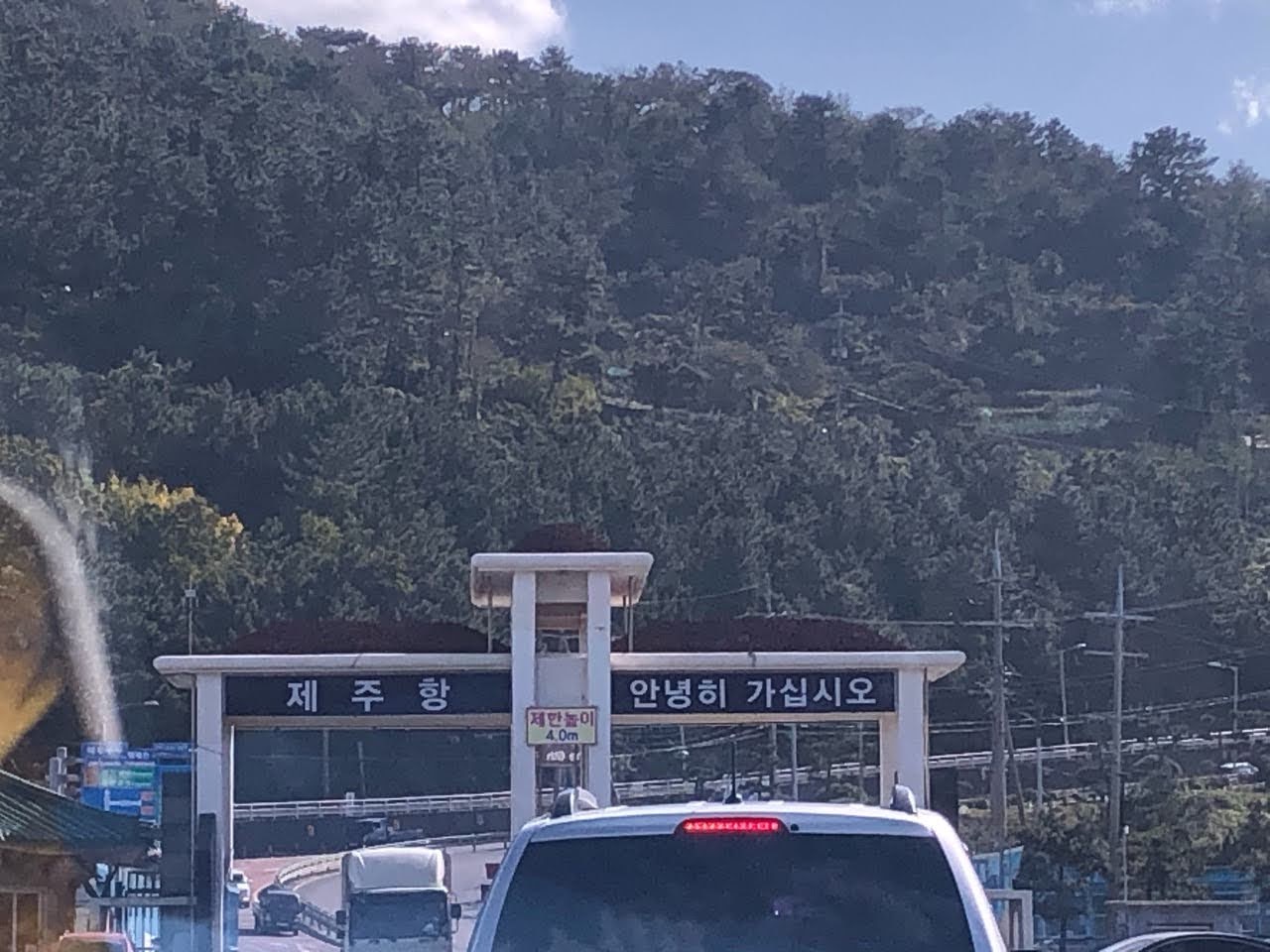 It feels a bit strange to drive a car I used to ride in Seoul and on land in Jeju Island. I don't know if this car can go back to Seoul.