I have my iPhone wake up alarm sound set to music. The same music comes out every time, so I change it occasionally. I listen to radio music all day long, so I would like to start the morning with KBS Classic FM or CBS Music FM.

However, iPhones and iPads do not allow specific apps to run at a set time. There is no radio app that turns on a specific broadcast at a specific time like an alarm. It's because iOS doesn't fully support this yet. The Shortcuts app or the Timer app doesn't have this feature.

I gave up on the iPhone or iPad and looked for a way to do it with a MacBook. To summarize:

If there is a radio app that plays automatically at a set time, then No. 2 and No. 3 are solved at once.

1. Make the MacBook turn on at a set time

Automatically turn off external monitor when macbook is closed A comment on the post reminded me of the sleep setting of the power saving function. I found that it was possible to set a time to start up or sleep on the Mac to save energy. Here's how to do it:

2. Turn on the radio at a set time

Now that the MacBook is turned on, the radio automatically turns on at a set time. There are two ways:

(1) Automatically play when the radio app is running

I need the app to play the radio when the app is opened. This doesn't work with the MacBook's Automator either. This is because the app itself has to support it.

On the MacBook, you can use the free app to listen to domestic radio. Korea OnAir Radio App is mainly used Occasionally, a $3.99 in-app billing notification will pop up asking the developer to buy a cup of coffee.

However, this app doesn't have a feature that automatically plays on startup. There is no function to play at a set time.

The Ronnie Radio, which was used on the iPhone and iPad, was recently released for the Mac as well.

This shows program information by time, so you can know what kind of program you are currently in. iOS can be used for free by viewing advertisements, but there is a fee for Mac.

This app has an auto-play function when the app starts. However, I can't select a channel at startup.

Still, there is KBS Classic FM, so I bought this app to set it as a wake-up alarm. 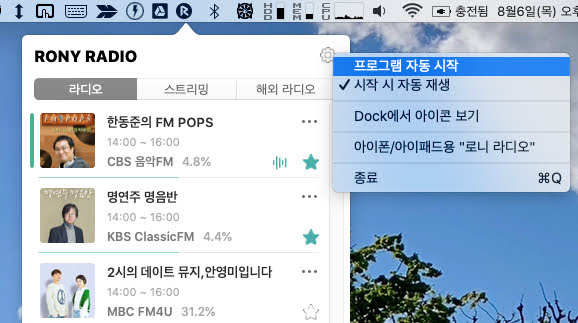 Occasionally, I completely shut down the MacBook when moving, but the program autostart was not turned on to avoid unintentional radio sound when the MacBook was turned on at Starbucks, etc.

I found that it can be done with Automator. I was looking for a simpler way, so I can do it with the Mac calendar app.

iOS can't open files in notifications in the Calendar app, but Mac Calendar can do this, but you can open the app here.

This app can be played at a set time like a notification. Without the calendar above, just set the time it will play in the app. You can even choose a radio channel and it's free. 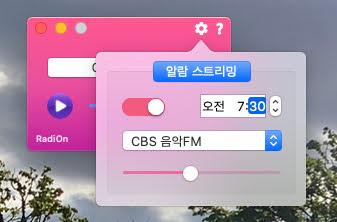 However, there is no KBS Classic FM.

3. Make sure that the radio app is launched 1 minute after the MacBook is turned on

Initially, I made a calendar event with my MacBook at 7:30. But the next morning, the MacBook was on, but there was no sound on the radio.

If Ronnie Radio plays a specific channel at a specific time, the calendar is not used and the 3rd step is reduced to 2nd step. Of course, if it is not KBS Classic FM, you can use the free app RadiOn-With Alarm. The RadiOn-With Alarm app seems to continue to use Loni Radio after two years of being updated.

It would be nice if Ronnie Radio added a notification enabler so you could choose the time and channel.
I wanted to study and make the radio app I want, but I don't want anything other than this and it will take a few days to make, so I think it's better to just buy the app.

Recently, I listen to the radio all day, and the radio turns on automatically without opening my MacBook and running the radio app every time, so automation has increased in my daily life.