The transmission speed of the iptime wireless router at home is noticeably slow and the Wi-Fi 5G keeps disconnecting, so I looked for a way to increase the speed.

After applying a few methods, fortunately, there was no interruption in Wi-Fi 5G, and the speed improved noticeably. Among the methods I found on the Internet, I have compiled a list of successful ones.

For reference, the screen may be slightly different depending on the program version, but the menu structure is different.

Some devices, such as smartphones and smart TVs, provide either one or both. That's why these days, Internet wireless routers support both. Therefore, you need to set each of the following items. 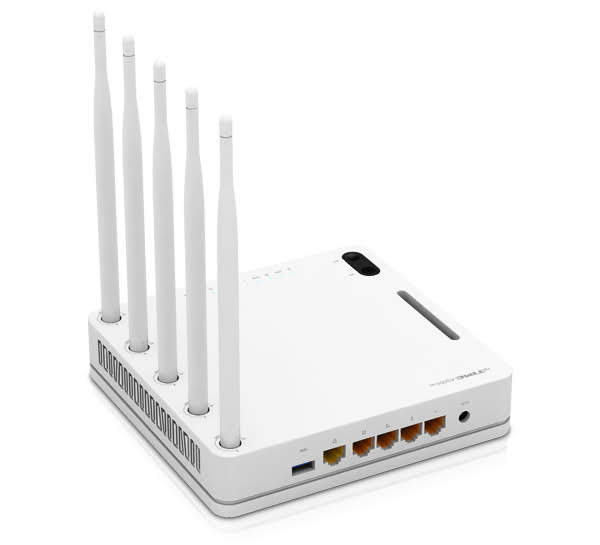 How to speed up wifi AP speed

The latest is not always the best, but I upgrade to the latest firmware considering that the creators must have worked hard to fix it.

iptime can be accessed through a web browser to upgrade the firmware.

2. Change the name of the Internet wireless router

The default name is iptime, but people connect by looking at the router name on their smartphones, so it is better to put your own name. Like MBOUT, the name of the router that was popular during the Lee Myung-bak administration.

In my case, Wi-Fi 5GHz and 2.4GHz were distinguished and named respectively. Happytime is 2.4GHz, Happytime-5 is 5GHz. So, if Wi-Fi is not good, like in a corner room, you can connect it separately. 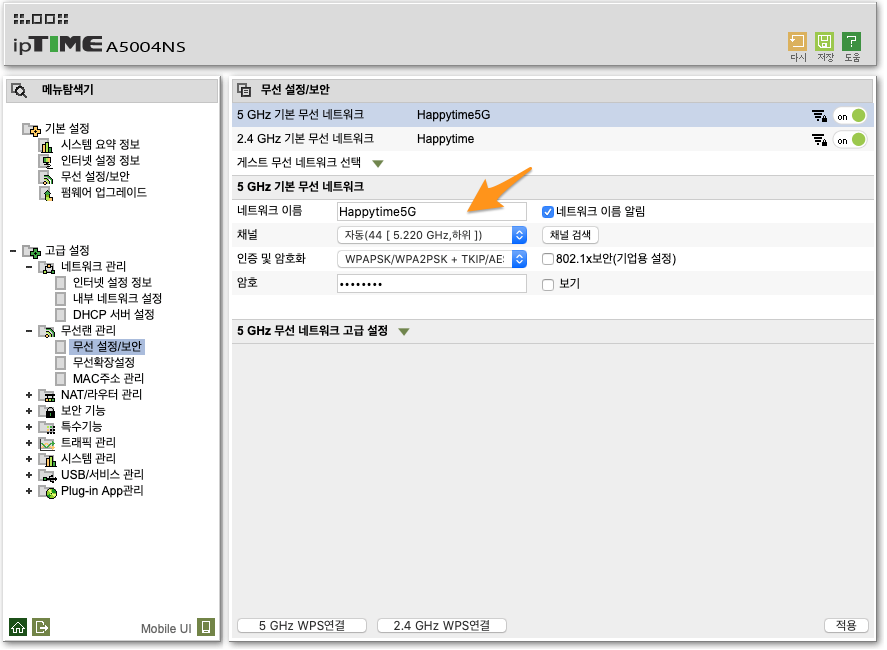 This is what I saw in Klein, but when I actually set it up, there was a difference in the transmission speed. The test results below are What's in Klein이다. 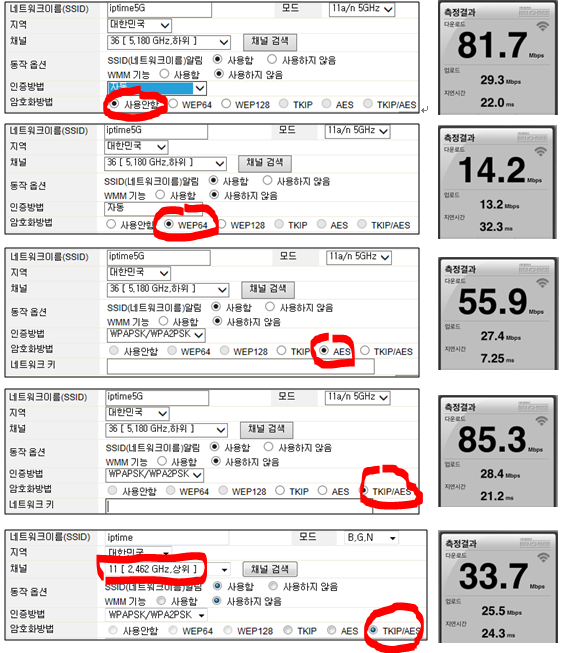 Without encryption, the transmission speed is fast, but it is slow because it can be used by others, and above all, there is a risk of seeing all the packets. If you use the above encryption method, the speed is similar to that of no encryption. 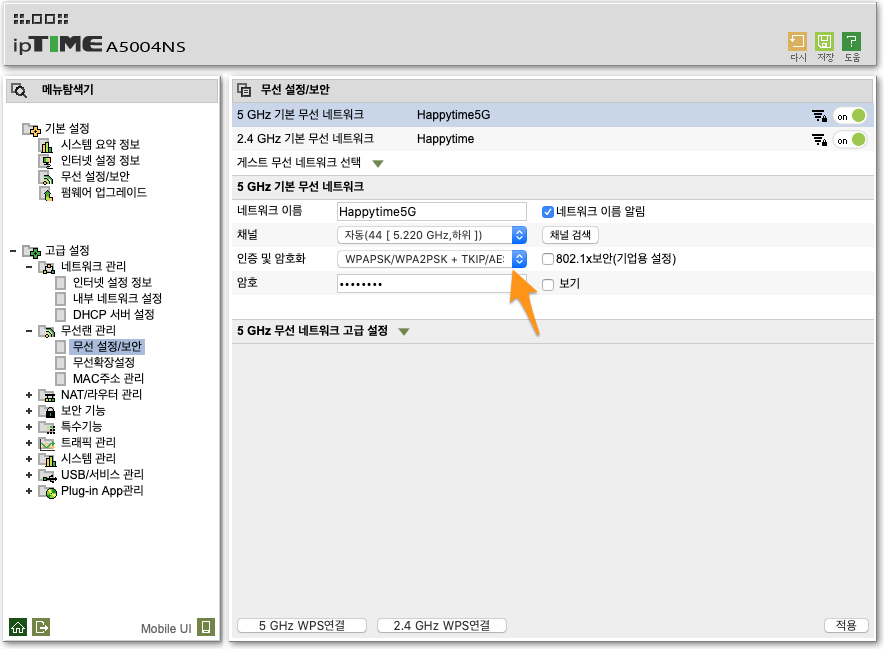 If the maximum speed does not improve, it is better to select WAP2SK+AES (recommended), which is the default option recommended by the router.

4. Search for the best channel

The Internet wireless router selects and uses a specific channel. Other wireless LAN APs can use the same channel, but then the WiFi overlaps and slows down. It is similar to when there are many cars on the same road. 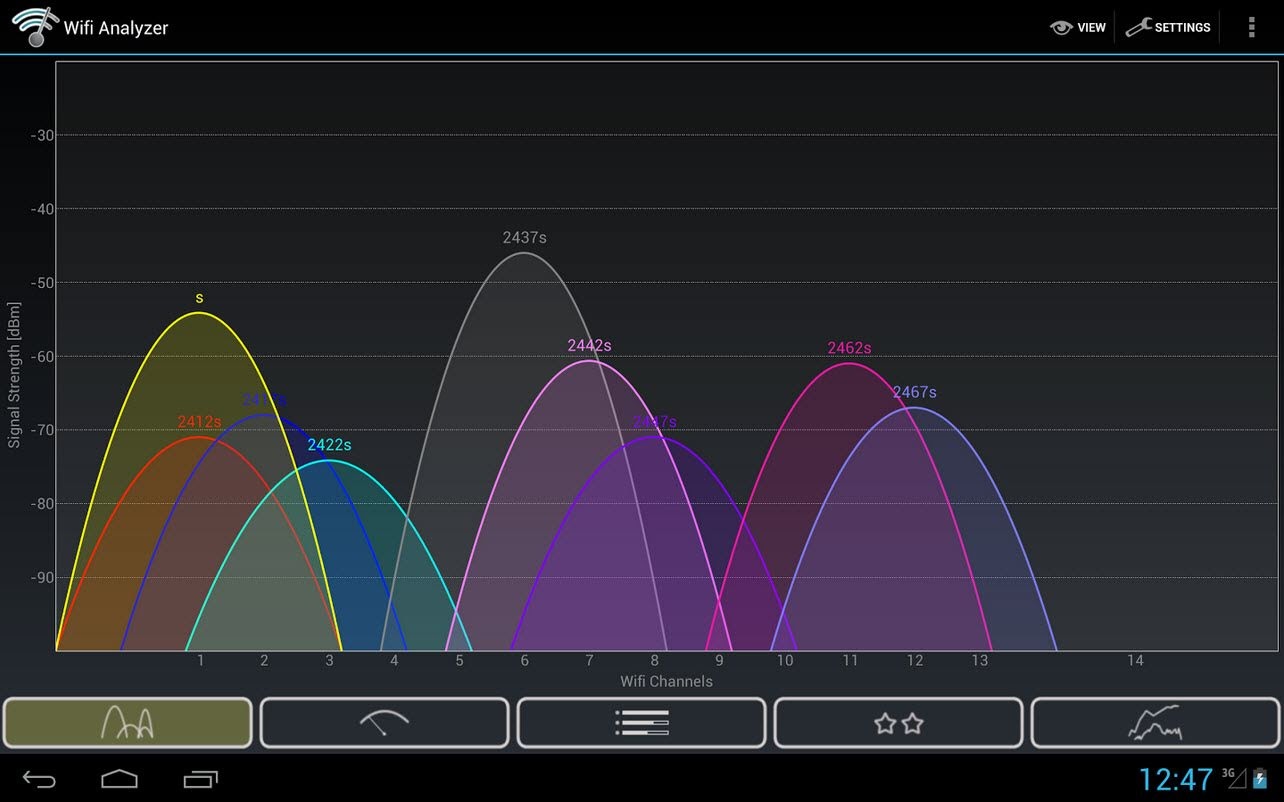 Therefore, if there is another router nearby, it finds an empty channel for use only by our home wireless router.

In the Wireless Settings/Security menu, click the [Search Channel] button for each of 5GHz and 2.4GHz to find an empty channel. 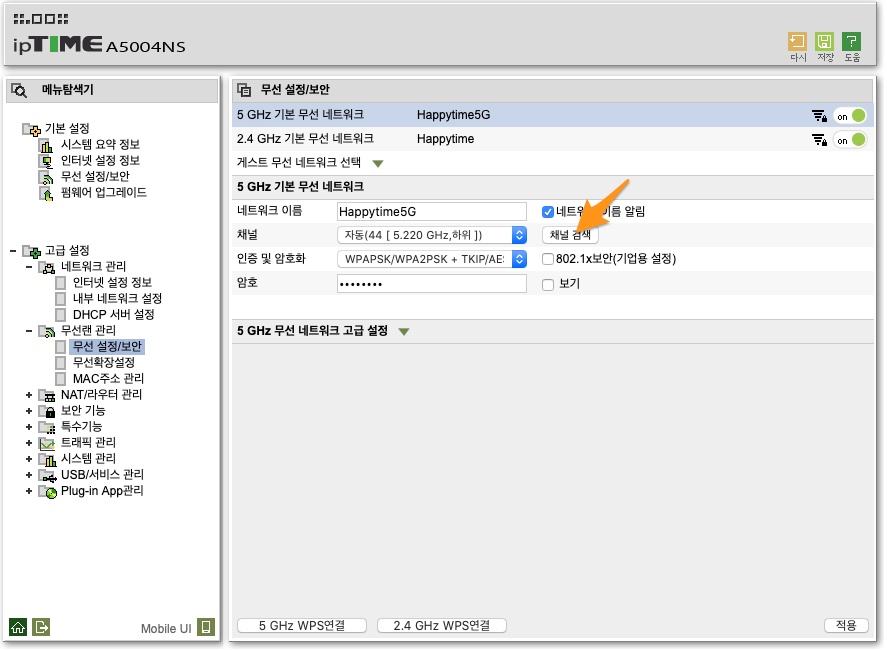 Do this occasionally, as routers may be added or changed in other houses.

The iptime can be selected from Auto, 20Mhz, and 40Mhz. If you choose 40Mhz channel bonding technologyBy using two adjacent channels of the 20Mhz band through  Double the performance with Channel Bonding say you can

However, in the meantime, the channel size was set to 40Mhz, but it was cut off. If you do it automatically, it seems to be set to 40 MHz. 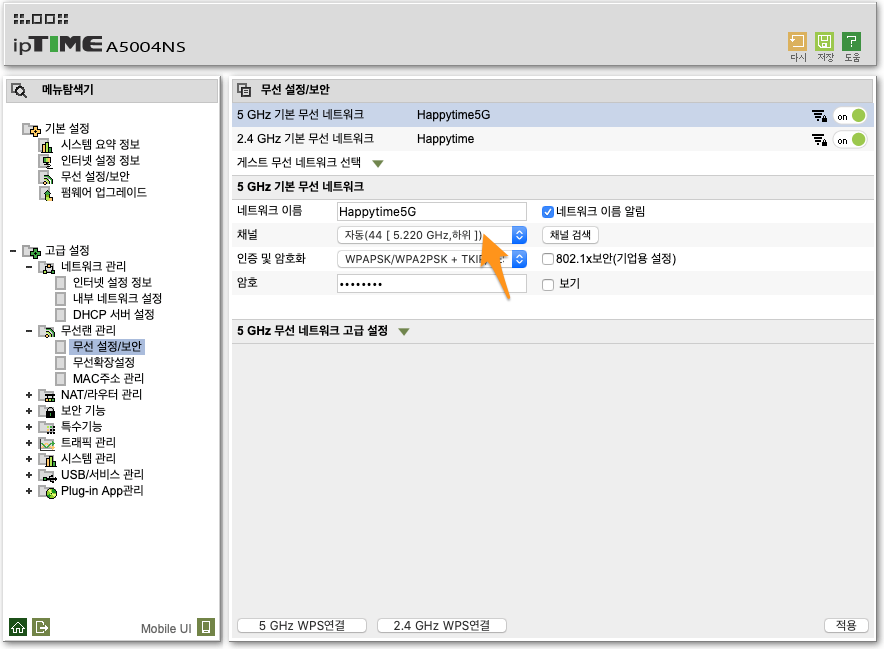 The value ranges from 1 to 2347, and it is said that a larger value is faster and less stable. Therefore, to increase stability, lower the value, and to increase speed, increase the value.

The default value is maximum. If there are many walls or frequent disconnections on the router, you may need to lower the value.

In my case, it has been working fine for a while, but recently it has been cut off or slowed down, so I lowered the value a bit and set it to 2,000 for now.

On the Wireless Settings/Security screen, click Advanced Settings with the green arrow down to edit the values. 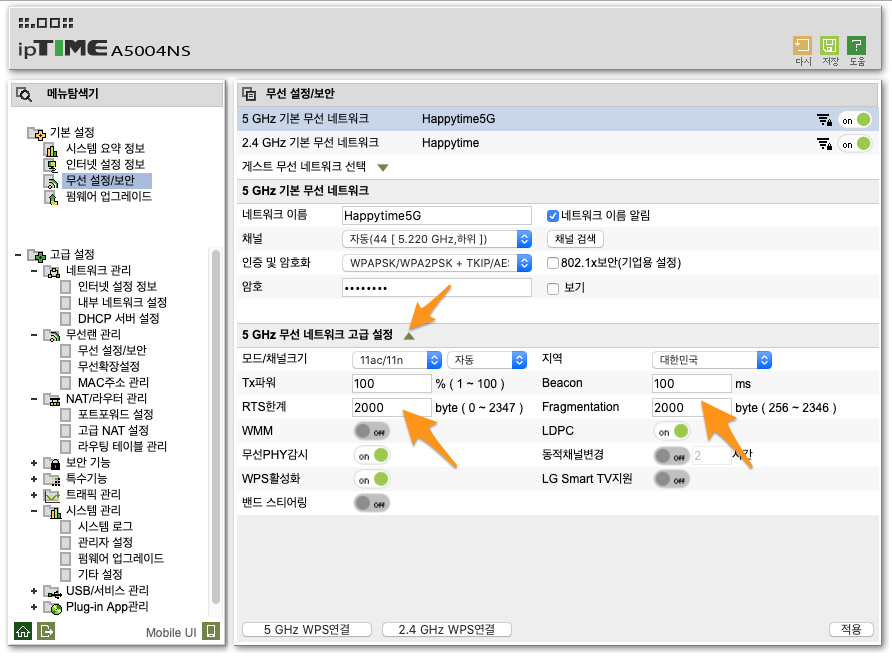 Q&A Answer on IP Time HomepageAccording to WMM, the functions are as follows:

The main function of WMM is Power Save. Among the functions, Power save mode saves power by putting the operation of the wireless cassette in a standby state when an idle time occurs for a certain period of time while the WMM-supported AP and wireless LAN are connected. is.

In the case of a desktop PC, the effect may be insignificant, but in the case of a wireless Internet phone or mobile device, the standby time can be improved by about twice through the power save function of WMM.

The WMM function is used to increase the standby time of wireless devices with the WMM function, but it is turned off because there is no need to save the battery of the mobile phone or smart TV used at home. However, I don't know how much speed or stability is improved by turning this off, but IPTIME manufacturers say that they advise to turn off WMM when the connection is cut off or the speed is slow. 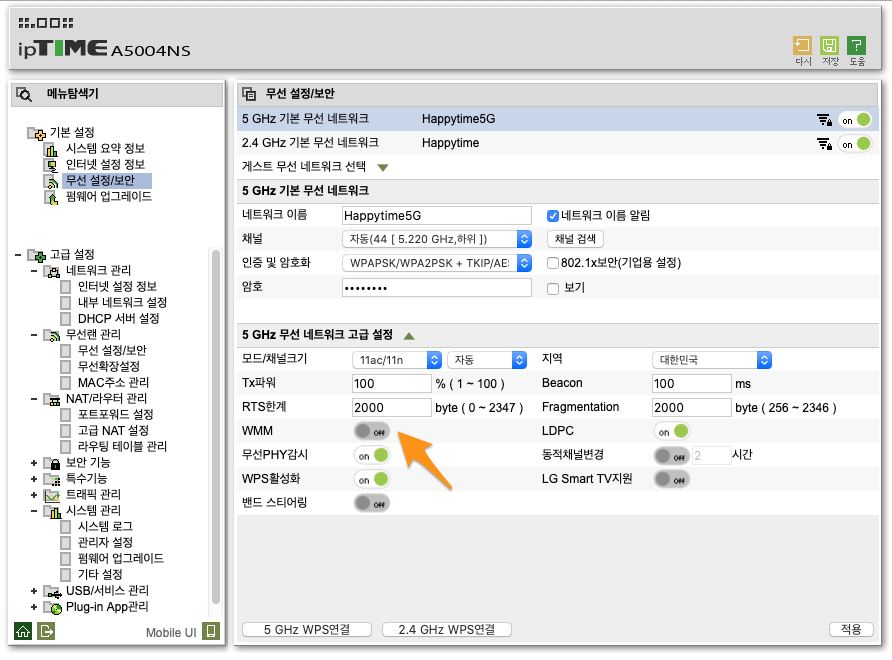 If you look at the IP Time settings, you can automatically reboot on a specific day or time. In my case, I set it to turn off and on again every morning. 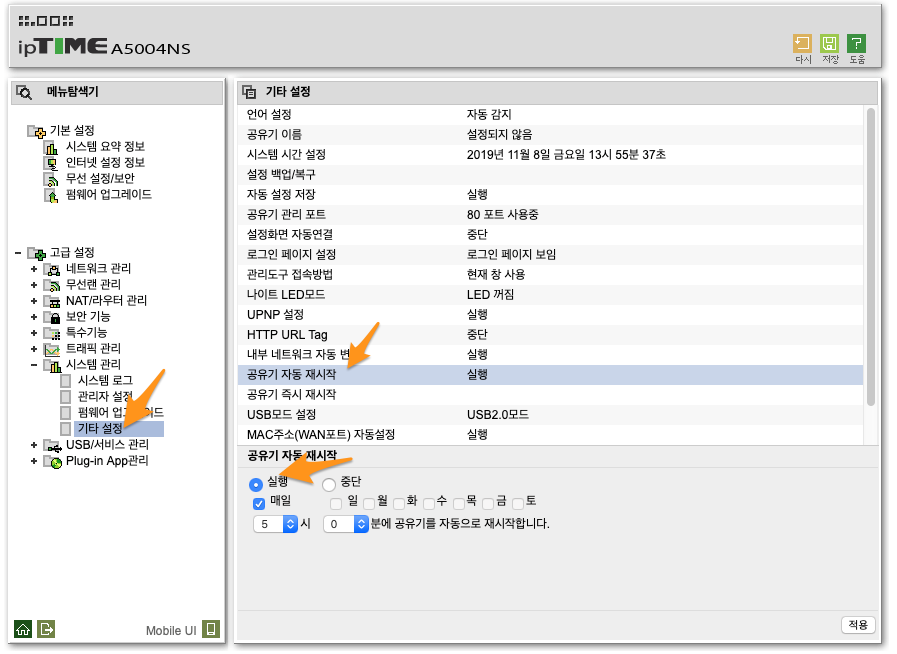 I have searched and applied the above. Even if the wireless router is not iptime, the principle is the same, so it seems that you need to find a program for the item and set it.