If you upload a photo or video to Google Photos, the name of the area, the situation (the sunset), and the face can be recognized without entering text, and it can be viewed on various devices, making it convenient to view the photos.

The free version increases the size reduced to 1600 million pixels rather than the original image, but the capacity is unlimited.

Google Photos doesn't have the ability to erase all photos.

In my case, I have a g-suite paid account, so when I back up my photos to Google Drive, they appear in Google Photos. I didn't know that, and I synced the photos of Google Photos and the external hard drive again, and the photos were uploaded as duplicates.

As of July 2019, 7, the automatic sync function between Google Photos and Google Drive has been removed..

instead of sync How to import google drive photos from google photos is changed It seems that this menu is still displayed sequentially. I can't see it yet.

It seems that the reason Google changed the policy of the function like this was because I was confused at first. Interworking between services is difficult to make, but in a state where there is room for confusion, the interworking function would have been burdensome for Google.

Anyway, I think the new policy is better for beginners of Google Photos and Google Drive like me. Theoretically, if you upload it to Google Drive, it would be good to automatically show it in Google Photos, but it was confusing for those who synced Google Photos with an external hard drive.

While testing this function at first, duplicate photos were uploaded to Google Photos and I had to delete them.

Google Photos doesn't have the ability to delete photos. No matter how much I search, it doesn't come up. Then I found a way to fix it.

How to delete all photos in Google Photos

1. Select and delete one by one

You just have to delete them one by one.

You have to select the first one, scroll and shift+click to delete it. If you select several thousand photos, it is no longer selected, and if you drag the year bar next to it, it cannot be selected continuously.

crazy How many thousands of photos?

Use a macro program that repeats this.

Who selects and deletes macros written in javascriptfound

The source code is plentiful thanks to GitHub's free policy.

Copy and paste the code into the console of Google Chrome and press Enter to select it by yourself and press the Delete button. Then the browser alone deletes my photos overnight. 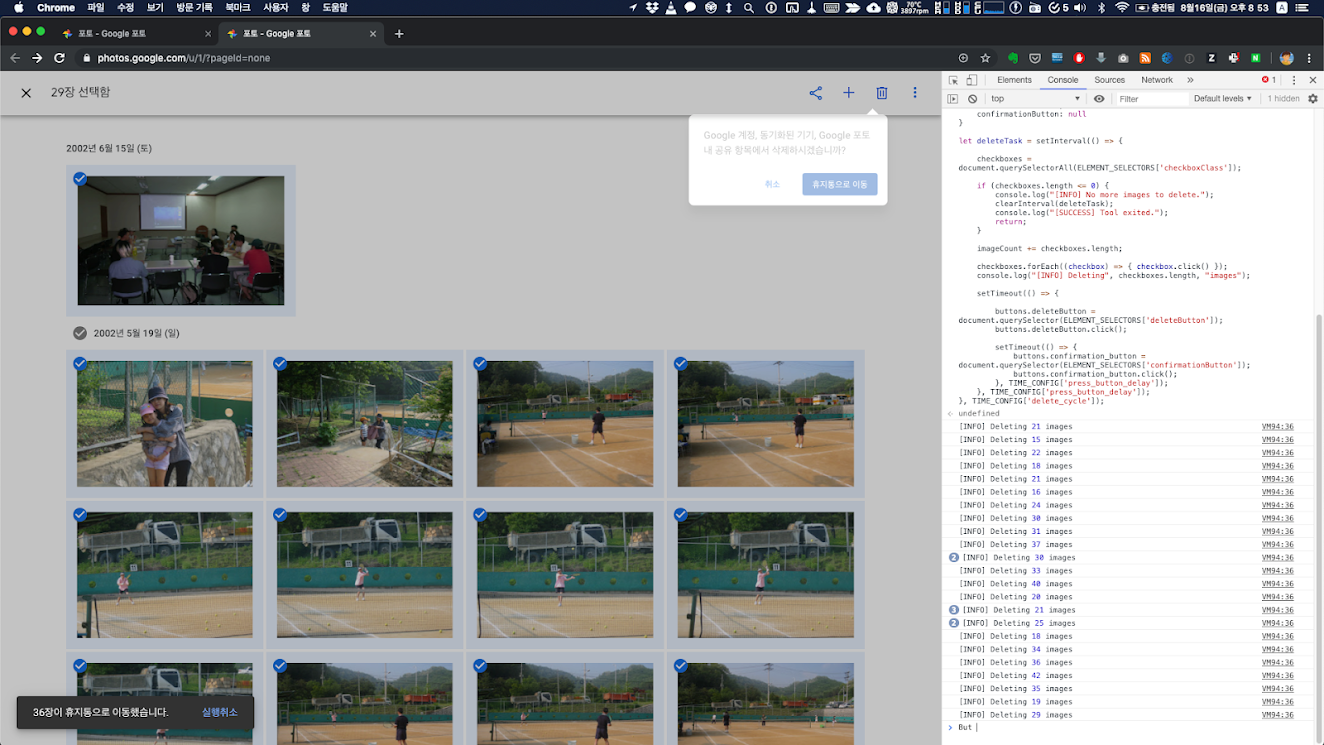 Then I select and copy by myself until the photo disappears. If there is a pause in the middle, it is because the Internet is slow and the time is not correct when deleting and reloading again. Just paste the code again and hit enter.

When using Google Photos in Korean

At first I tried this code, but it didn't work, so when I looked at the code, it was because I had set the language of Google to Korean. So, I changed the button code name to Korean. When I did it again, the button to move to the trash was not pressed, so I found the class of this button and modified it.

If you set Google Photos in Korean, copy and paste the code below. I just changed the button name to Korean and only changed the class.

Google Photos may change the code later, but in that case it would be better to go to the original github repository and check it out. I just edited the Korean button name.

When operating the Naver Cafe service, there was no menu to leave the cafe on the mobile web and app, and it was down there on the PC web as well. It was deliberately made uncomfortable. I made a function so that you can unsubscribe even on mobile.

It is the policy of the service that Google Photos does not have the ability to erase all photos.

Although uploading is easy, deleting is deliberately inconvenient. Also, if you delete it, you cannot restore it, so if your account is hijacked and someone easily deletes it, it will be useless, so this deletion function may not be provided.

I understand from the point of view of the person making the service, but... too uncomfortable It's not just one or two pictures, not even a thousand. Have a backup plan for abusing.

People make these macros to solve problems. I have summarized how to use it simply above, but I don't know how many general users can follow it.

The fact that people are asking these questions a lot and solving problems with a workaround means that there is a lot of need.

Deletion is not easy because there is an issue with recovery, but the terms of use probably said that it is the user's responsibility.