But that's it. Whenever I install a lot of apps and synchronize them so that there is a lot of data, I do a backup first, but this takes too long.

When I want to sync my schedule before going to a meeting or before I get home from work, I want to sync to get a new app and put it on my iPod touch, but I have to wait for the entire backup before syncing.

The iTunes program does not provide a way to block it at all.

So, in order to prevent automatic backup when connected to charge without syncing, I even stopped automatically syncing when the iPod touch is connected in the settings. 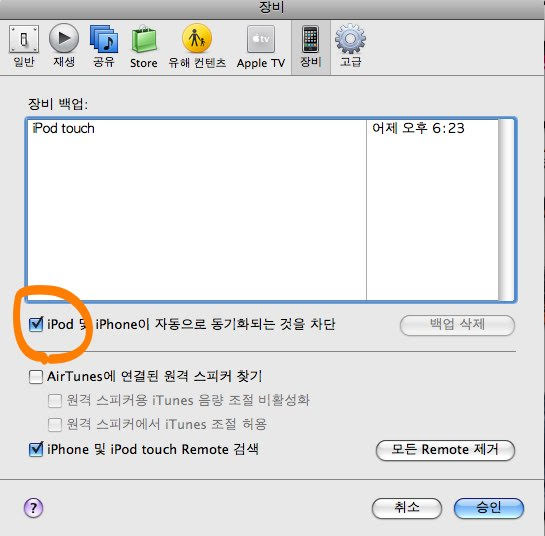 They gave up the convenience of auto-sync because of the time it takes to wait for a backup. This means that usefulness is discarded because of system performance. Of course, backups are always valuable in case of an accident, but if they're too slow and annoying what you're doing, you'd rather give up on them if they're not that important.

In the meantime, I've been looking for a few ways, but there are about three.

After connecting the iPod touch and starting the backup, gently press the x button on the right as shown in the figure. Then stop the backup and start syncing.

At first I thought that pressing this x button would stop syncing and didn't press it. However, I found that when I clicked during backup, only the backup was stopped and the synchronization continued. How can a user like me know the deep meaning?

This method doesn't wait for the backup, but it's annoying because you have to click it every time you connect.

Method 2. Synchronize right away without backing up: Change settings manually

There is a way to change the setting so that it does not backup when syncing. You have to change settings that are not provided by iTunes and are hidden.

1. Close iTunes if it is running

If you turn on iTunes again and connect the iPod touch, syncing starts immediately without backing up.

However, if you want to make a backup from time to time, type the following in the terminal.

Open the \Apple Computer\iTunes\iTunesPrefs.xml file and insert the following contents Add below and save.

For macOS  Backup Disabler There is a simple free program to toggle backup settings called . People make and provide things that Apple doesn't make, like other Mac OS freeware.

It is good to make a backup once in a while, just in case, so you can change the settings with this program and make a backup. If you think that backup is important, you can leave it as a backup every time and press the x button to stop the backup only when it is urgent.

Each person has a different set of contents installed or stored on the iPod touch, but in my case, the backup time was too long. It's me, I do a lot of sync checks for apps, and there are a lot of apps installed.

As always, there is a difference between subjective mood and objective quantification. So I measured it. As a timer on your Mac dashboard.

Backed up and synced exactly as iTunes provided. 5 minutes 44 seconds

Now, using the tips above, I did not back up and synced it right away. 33 seconds

I installed a lot of apps and synced memos, contacts, and even schedules, but these days, the backup time is a bit harsh.

It feels really refreshing to see syncing right away without waiting for a long backup time. Am I the only one? Does Apple know about this?

Now I have turned on the option to automatically sync when the device is connected. In order to get the benefits of native automation.

Is it 1981? Xerox for the office automation software market in the graphical user environment, the forerunner of Windows and Mac OS. Xerox StarCompared to the previous text-based system, such as mouse and icon, graphic user environments, Ethernet, and laser printers, which are now taken for granted, were innovative.

However, when I clicked once, it was said that it could not be used properly because it was Hasewol. Of course, it was also terribly expensive, so it was a bummer. System performance is like that. No matter how useful and easy to use, the design is useless if it works properly or is terribly slow.

Backups are very important, but to the extent of backing up the contents of the iPod touch, the time to back up before syncing was bigger than the belly button.