The results of the 2018 US midterm elections.

Election results viewed on a map can distort information

Like any other media outlet New York Tom Eames also visualizes election results on a map did.

Which color seems to be dominant in the gram below?

it is red The red one seems to have overtaken the blue Democrats with the Republican Party.

However, as indicated above, Democrats and Republicans are actually similar, and there are more Democrats. 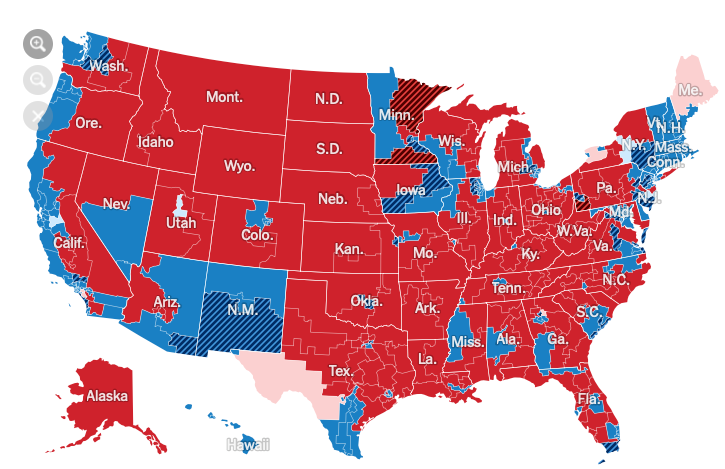 The area of ​​the cartogram and map is distorted, but the data can be understood well

It is intuitive to display area-based information such as number of seats or population data on a map. However, if you do the above, the map is alive, but the data looks distorted.

Draw a picture in which the area of ​​the map is distorted according to specific values ​​such as number of seats and population data. cartogramIt is said It is also called a proportionality diagram of variance.

Below is a 2008 US Electoral College cartogram from the Korean Wikipedia cartogram.

Democrats in blue have 365 seats, which is twice as many as Republicans. However, there is a disadvantage of not knowing whether this is a US map or a Chinese map. 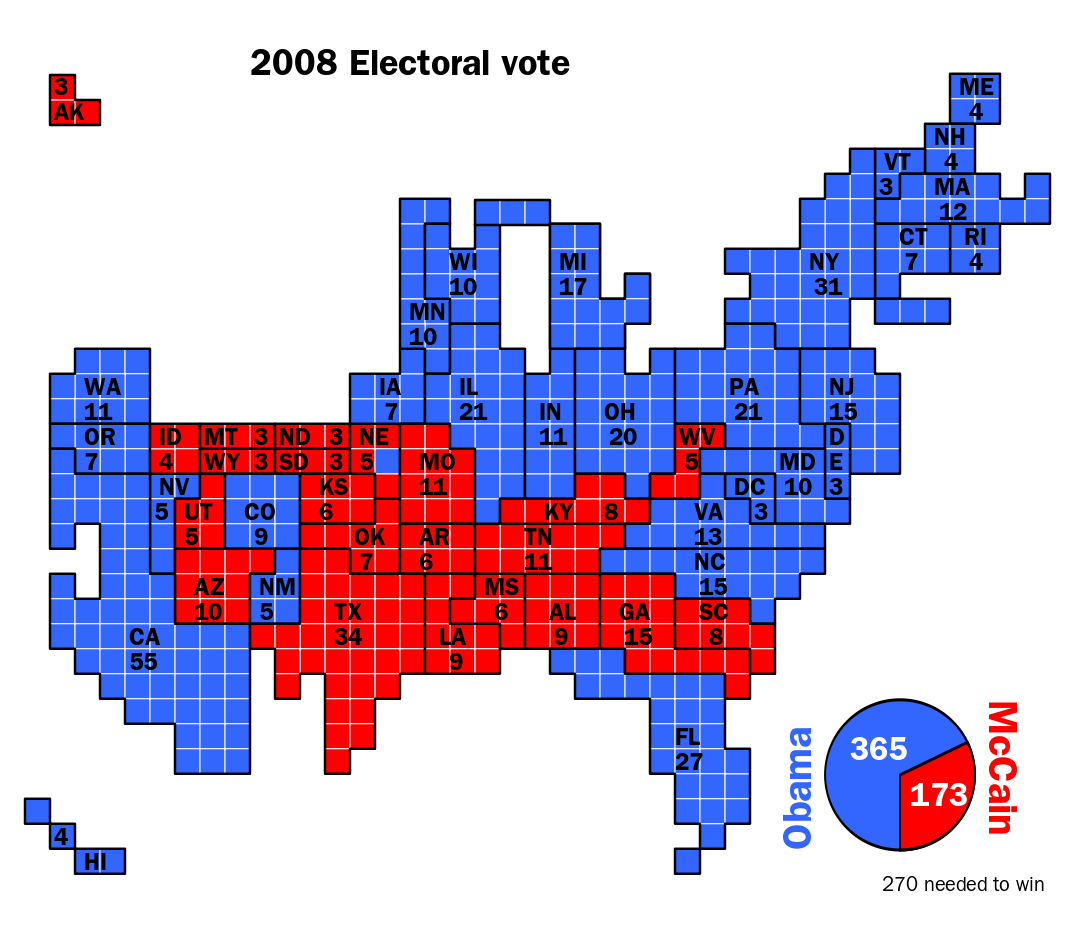 I saw it on Twitter, and the New York Times, which seems to be very careful about information visualization, this time new katogrammade with

The New York Times' election results cartogram is once again innovative. In order to reduce the cognitive bias caused by the difference in area, the size is identical, but the shape is deformed instead. #information design https://t.co/WBrcjFJor4

But this time, it's a slightly new cartogram. In order to maintain the shape of the entire map, the number of seats is displayed in cells of the same size, not the area of ​​the actual map as shown below.

On a map of the United States, the blue and red colors look almost identical. In fact, the Democrats and Republicans are 51.5%: 46.7%. 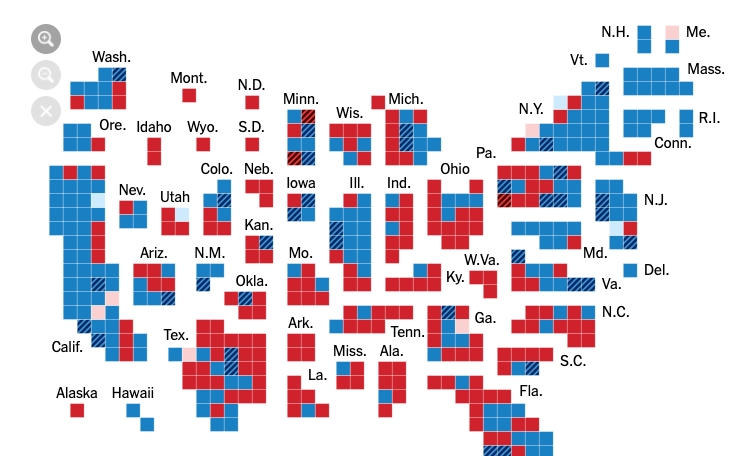 We have to look forward to seeing if such a cartogram will appear in the local elections and the National Assembly elections in Korea.

There is also false information visualization, so you should be suspicious of what you see.

When creating documents, presentations, or products, the part that deals with data visualizes information.

You can find inspiration for these visual visualizations and interactions in animation or science fiction movies. In addition, it seems that there is a lot to learn if you look closely at the fact that these statistics are visualized through the media.

Makes a difference of 0.4% three times

Only 0.4% difference, but the graph is 1/3
sbs is pathetic too. pic.twitter.com/JBdSFa3flD 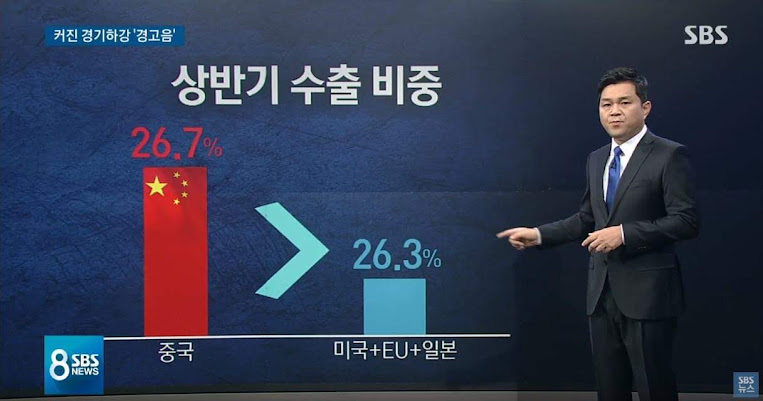 The following is a cartogram of the election results of the Democratic Party candidates Moon Jae-in and Hong Jun-pyo in Slow News. 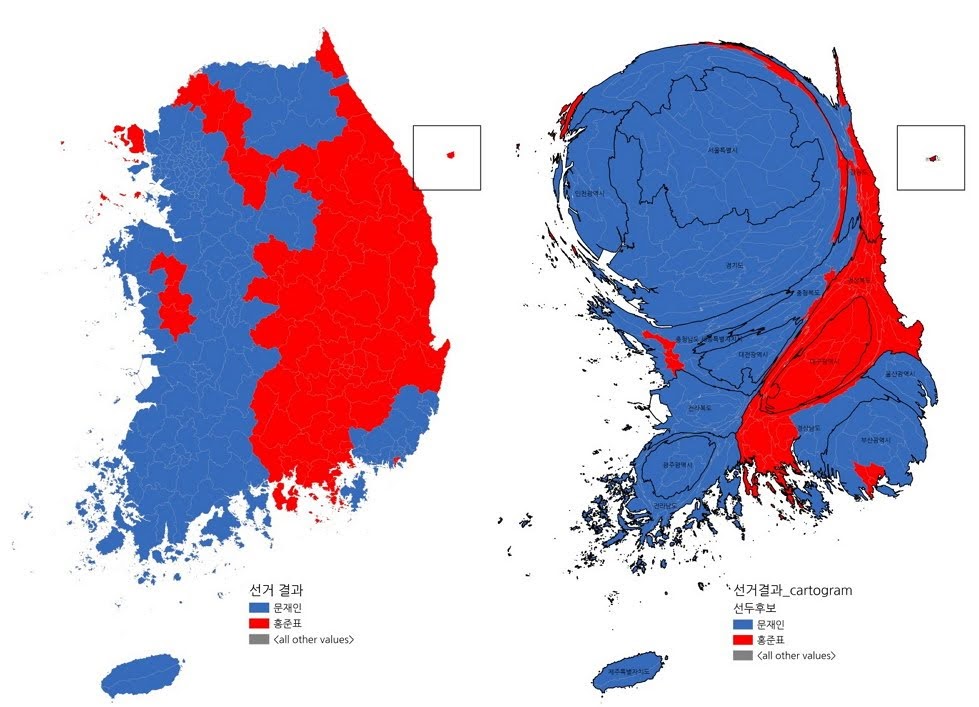 Information visualization is to make numbers easier for people to understand. Conversely, there are media and report materials that distort data by widening the bar graph difference.

Or, even when I create it, I think I should be careful because it may distort the data if I didn't intend to.