There are a lot of photos these days thanks to smartphones, but in my case, I have a digital photo file management standard that I have been using since 1996. I started by scanning photos taken with a film camera with a scanner, but the storage locations on hard disks, CDs, and external hard disks are different, but the standards are simple. 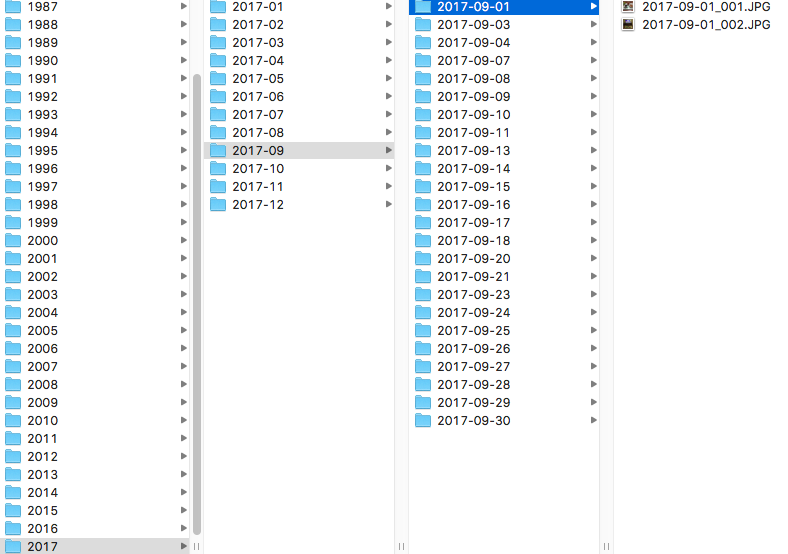 There are only a few year and month folders, so you can just create them. When using Windows, I used ACDSee, but from using Mac NameChanger 나 Hazel use etc.

There was a time when it was hard to see if you put it in your computer, so I put it in a TVX so you can watch it on TV. But it was so slow it was hard to see. So, as soon as the iPad came out, I sent a person to the United States on a business trip to buy the 32GB, the maximum capacity. I couldn't put all the photos on the iPad, but I played while looking at them easily on the iPad at home.

As everyone had an iPhone at home, they uploaded photos to flickr and now Naver Cloud.

Photos for digital frames are uploaded to Naver Cloud, and the rest are uploaded to Google Photos. There is a fee to upload the original, but it is infinite for a small size. After all, the original is stored on an external hard drive, and there is no need to upload the original when viewing it on a mobile phone. Like Naver Cloud, it finds people, animals, places, etc., so it is very convenient. Since I often take pictures of my daily life, Google Photos tells me that I have old photos every day. They make a movie by collecting photos themselves, so they curate it and give it a new feeling.

If you use Naver Cloud or Google Photos, you do not need to manage file names. What you need to care about is not the file name, but the date the photo was taken in the EXIF ​​of the photo. Still, I do file management because I don't know what form I will see later.

I looked at the meeting minutes I recorded while making help when I was an employee, and I made it into a txt. If it had been made with Hunminjeongeum, I wouldn't have seen it now. Perhaps later, I thought that the longest lasting format was ASCII.

Although the jpg format for photos has changed a lot internally, the basic file format changes little. Storage is also involved, but fortunately, the most popular file systems are Windows and Mac, so it's probably enough to manage that. Saved in Windows format and now in Mac format. For now, I store my photos in Naver Cloud and Google Photos, but I don't know how this will turn out in the future. There was a time when Flickr was unlimited, so I uploaded it all on Flickr.

life is memoryI think. Memories are forgotten and distorted, and there are some things we don't want to remember, but life is just a one-way journey, and the process is meaningful because it is a journey that comes and goes. .