I use Windows with VMWare on Mac. When I first got my Mac, the VMware image was less than 6GB, but I saw it a while ago and it was 23GB. However, the capacity of vmware on Windows was 6.5 GB.

Even when using Parallels before Reduced parallels hard drive capacitythere was There seems to be a way for vmware too, so I looked it up in VMware communities.

We found the reason that the capacity of vmware in Windows and the capacity shown in Mac are different, and we found a solution.

Frequently Asked Questions about VMware Fusion was in I thought that the vmware image was compressed and searched with the keyword compress, but I was using the expression shrink.

When using a hard disk on a virtual disk, the usage increases. This is because vmware does not automatically reduce the size of the image that is actually reduced by deleting the file. So, you have to force a reduction. I don't know why it doesn't happen automatically because I haven't looked into it in detail.

How to shrink a VMware image 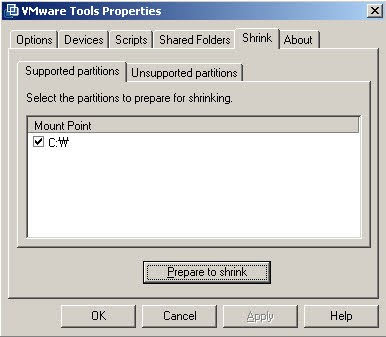 At this time, the hard disk capacity of the Mac must be sufficient (?). When I pressed the [shrink] button with about 8GB of hard disk remaining, it said that the remaining space was insufficient. I didn't know how much free space there should be, so I moved as much as the size of the vmware archive to the external hard drive and tried again, but it was successful.

So the vmware archive file that was 23GB became 6.5GB. Because vmware fusion becomes a 3D game battlefield와 Sim City 4, I installed Virtual Tennis, but I had a problem and deleted it, but the capacity seems to have increased at that time.