Google Earth is a freeware software that allows you to view real-world aerial photos of the world map. You can view pictures of cities you want to visit, such as New York or Tokyo, in 3D, so you can sit still and travel around the world. Also, in terms of local search, hotels, restaurants, etc. can be found on the map of the live-action board.

I travel around the world with my child at home, and my child loves it. In particular, children seem to like the movement of turning the earth, searching for continents on the earth, and entering a country. See the Grand Canyon and see New York. I really like it when you show me the places I went on a business trip and explain it to you. It is a pity that Korea is not detailed. 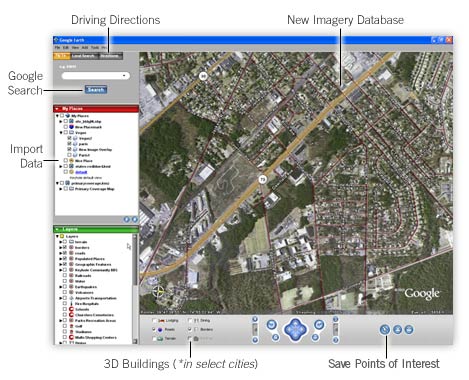 There was a time when Korea's Blue House and military facilities came out as it was and became an issue in newspapers. It seems that Google and Korea have not yet negotiated security facilities in Korea.

The most interesting thing is that if you specify a starting point and an ending point, you can know the way as if you were actually driving a car. The road is marked on the road in the live-action photo, and it is marked at each intersection. When I went to sunnyvale a few months ago, I had a Yahoo! I saw the way to the head office through Google Earth, and I knew it well enough to make the illusion that I was actually going to a car. What's more, once you've played it, it's cached, so you can play offline.

I tried to capture the road showing the way with a screen capture program, but it didn't work, so I took a picture with a digital camcorder. Below is Sunnyvale's Yahoo! You can see the way to (